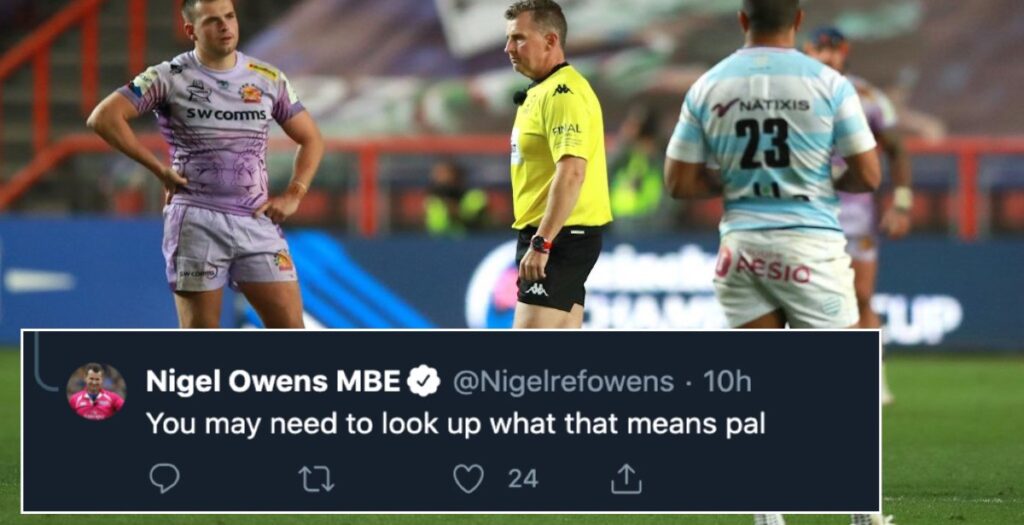 International referee Nigel Owens has responded to the mixed reviews he received for the controversial ending to Saturday night’s Heineken Cup final.

The Welshman took charge of the European final at Ashton Gate between Exeter and Racing 92 and two big decisions late on came under the spotlight.

Owens’ first call was to penalise Racing 92 on the Exeter try line for not releasing the ball, with fans insisting Sam Hidalgo-Clyne entered the ruck at the side.

Racing lost it because Nigel Owens made a mistake. Instead of penalizing Hildalgo-Clyne for entering the ruck illegally he gives Exeter the penalty. Penalty goes the other way Racing 2 points clear with 2 minutes to go

You may need to look up what that means pal

With that one convincingly justified by the veteran, Owens’ other big decision was to prevent Racing from taking a restart despite the clock showing there was still a few seconds left to play.

Exeter’s Joe Simmonds had converted a penalty and it looked like there was time for one last restart for the Parisian side, but Owens refereed to his TMO to find out if the clock had gone red when the ball traveled through the posts.

Much to the Racing players’ frustration and heartbreak, Owens was instructed to end the game there and then and confirm Exeter’s Heineken Cup glory.

“The fairytale is complete! From Devon minnows to European giants!”

I don’t want to be too harsh on Nigel Owens, but that was one of the worse refereeing performances I’ve seen in a while. Everyone has an off day, but felt he was trying to make the final too much about him instead of the two teams on show. Shame. Still love the bloke though!

Nigel Owens embarking on his usual “look at me” performance in the European Cup Final having botched the key decision on the Exeter goal line and gifted them the game. How people have convinced themselves that he is the best referee in the world is beyond me.

That’s very kind of you

The game ended 31-27 to the Chiefs and full match highlights are available below: