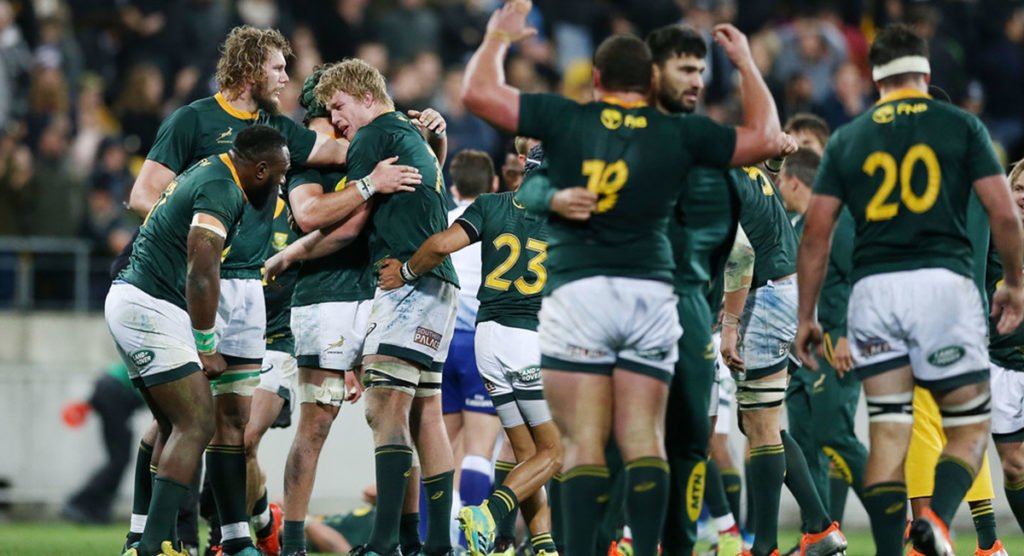 The Springboks held on to edge the All Blacks 36-34 in one of the more dramatic Test matches in recent memory. It was a famous win away from home, with a number of records broken in the process. However, New Zealand’s coaches are still puzzled as to why a late drop goal was not attempted.

South Africa came back from 12-0 down to lead 36-34 with minutes remaining in an outstanding contest in Wellington.

After an intense eighty minutes of rugby between two old foes, the All Blacks had one last chance at snatching the win after a relentless pounding of the Springboks immovable defensive line.

The obvious option was to attempt a drop goal, as that would have sealed a 37-34 home win. However, despite having prodigious talents such as Beauden Barrett and Damian McKenzie to turn to, they instead attempted to force a try. They came mighty close, but spilled a ball and the game was over.

Coach Steve Hansen was blunt as ever in his assessment of what happened.

“Should we have drop-kicked a goal? Yep, of course we should have. And we had plenty of opportunity to and we didn’t organise ourselves,” he said.

“What have we got to do when the clock’s running down (and) the scoreboard’s against us? We’ve just got to take a big breath and do things right and be clinical and, if we’d done that last night, we would’ve won the game. But we didn’t.”

“That’s New Zealand. They were going for the try, that’s the way they do things,” he said. “It’s a compliment to them. A drop goal is not the New Zealand way.”

Replacement scrumhalf TJ Perenara, who was marshalling his troops at the end, said they had weighed up all options but saw space out wide.

“The chat to set up for a drop goal did definitely happen, but we get a picture that we back ourselves to score in,” Perenara said. “And, looking back on it, I think it’s still the right call.”