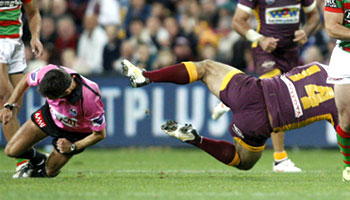 National Rugby League referee Tony De Las Heras was knocked out cold last Friday night after being bumped over then kneed in the head as the South Sydney Rabbitohs charged towards the tryline against the Brisbane Broncos at Suncorp Stadium.

Ref De Las Heras says he remembers nothing from the incident which left him lying motionless on the turf. Jamie Simpson accidentally collided with him, before Broncos forward Tonie Carroll knocked him unconscious with the knee, sending him to hospital.

Simpson, who hurdled over De Las Heras after bumping him over, actually suffered a grade one groin strain, later describing the collision as a freak accident.

“I was just speaking to Tony then and he said there was nothing I could do,” Simpson said.

“He said I was heading for a try if I went the other way but I ran into him. I thought I was in for a try – all I could see was the white line, which is why I couldn’t see him.

“I told him I was sorry, that I didn’t mean it and I wanted to just check up on how he is.”

“That knee he whacked the ref with is a bit sore,” Broncos coach Ivan Henjak said.

“I’m hoping it’s not a long-term thing with TC, maybe another week.”

Longer video below, showing the ref leaving the field