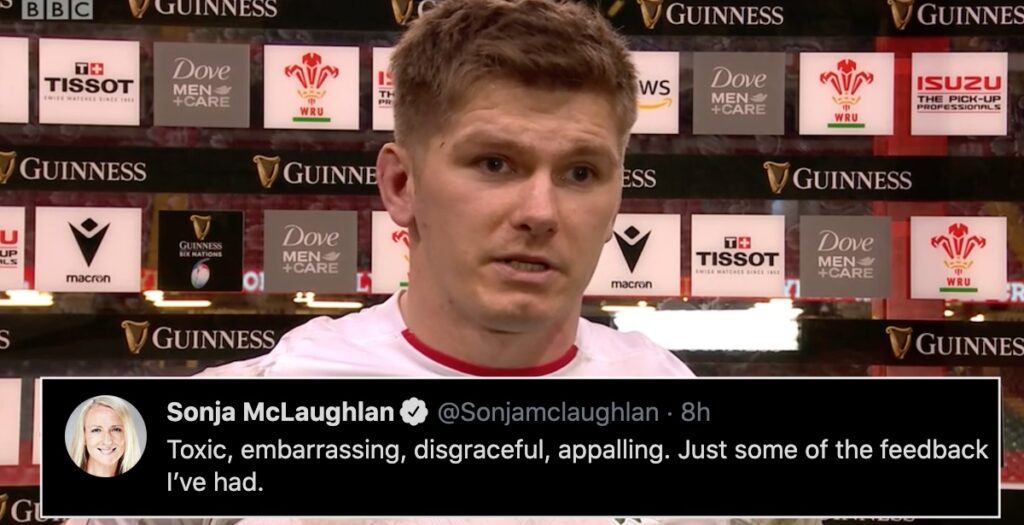 BBC commentator Sonja McLaughlan has been at the centre of a Twitter storm after her post match interview with England captain Owen Farrell on Saturday.

McLaughlan asked Farrell some difficult questions about the decisions made by referee Pascal Gaüzère following his side’s defeat to Wales in the Six Nations, which left the fly half having to defend hard.

About an hour later McLaughlan Tweeted that she was crying in the car following the amount of online abuse she had received from fans on social media.

Toxic, embarrassing, disgraceful, appalling. Just some of the feedback I’ve had.

Thanks for using @ sign so it’s all hit home.

Now imagine getting inundated with abuse for doing your job.

Since then former players and pundits have jumped to show support for the BBC presenter while also damning the comments made about McLaughlan.

To everyone who’s made sure my best mate Sonja’s driving home from Cardiff with tears in her eyes tonight: Look back at your Tweet and ask if you’d say that to your mum, wife, girlfriend or daughter. She’s world class and you need to have a look at yourselves.

I tweeted this after watching the interview @Sonjamclaughlan did in the week with Owen Farrell and was aired pre game, I’ve now seen the abuse she got for the post match interview which again was fair questioning and brilliant interviewing so all the trolls can do one! https://t.co/jjqw12XPRd

Another female sports broadcaster, hounded by trolls and reduced to tears. AGAIN.@Sonjamclaughlan you are one of the best in the business and hugely respected. Those interviews were a masterclass today. https://t.co/dwgoGBWJqT

Owen Farrell’s refusal to communicate properly as England captain was apparent yet again there under good and strong questioning by @Sonjamclaughlan.

Absolutely spot on. @Sonjamclaughlan was doing exactly what was needed after such a controversial game https://t.co/F9ZZoz4rUT

Young journos and others. Watch back @Sonjamclaughlan asking the hard questions that have to be asked after Wales v England. Great interviewer. Masterclass in how to do it.