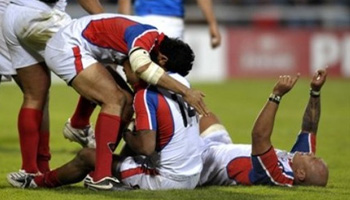 The Pacific Islanders recorded a historic first ever Test Match win on Saturday as they defeated Italy 25-17 at the Stadio Giglio to finish their tour on a high.

It was the first time in nine occasions that the Islanders had won against international opposition, sparking jubilant scenes at the final whistle.

After heavy defeats to both England and France in the past two weekends, the team made up of Fijians, Samoans, and Tongans has finally got the reward for all the hard work theyve put in, not to mention the natural talent that they have in abundance.

Italian coach Nick Mallet has now lost three out of three autumn tests after back to back losses to Australia and Argentina. His side were poor in the first half, but dominated in the second, although they were not able to break through the visitors defence.

“We had the ball for 35 minutes after the restart and I’m just sorry that we didn’t manage to score until it was too late,” Mallet said afterwards, complimenting the Islanders effort.

“We were in their 22 throughout the whole of the second half but we only managed to score one try,” he said.

“We need to be more humble. We should beat this lot if we play to our true level, it’s mental.”

It was the Islanders whos defence and temperament held firm though, as coach Quddus Fielea was full of praise for his side.

“I thank the guys for the fantastic match they’ve played today,” he told reporters.

“The last 40 minutes were very hard and Italy made us sweat.”