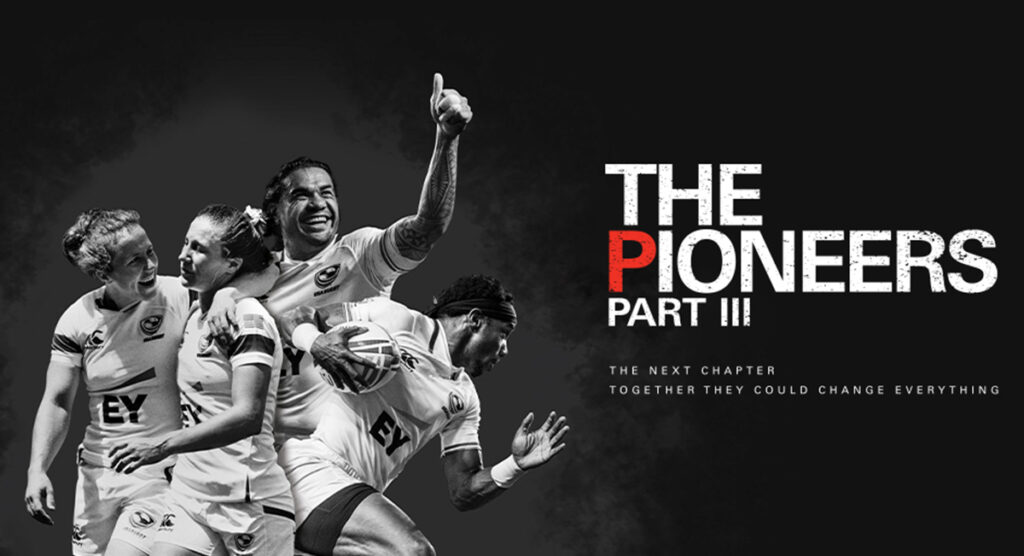 The third instalment of the award-winning documentary, The Pioneers, was launched ahead of the inaugural LA Sevens. For the first time the documentary will follow both the USA men’s and women’s sevens teams as they strive to become Olympic gold medal winners in Tokyo.

Following part’s 1 and 2 of The Pioneers, which saw the men’s team attempt to claim the Rugby World Cup Sevens on home soil, there is an incredible moment of opportunity for both the men’s and women’s sides to become the greatest sevens nation on the planet when the sport returns to the biggest sporting stage of all this summer.

The documentary will follow both the USA men’s and women’s sevens teams as they strive to become Olympic gold medal winners in Tokyo.

The new trailer gives fans a first look at the new expanded documentary.

In 2018, HSBC released ‘The Pioneers’ (parts one and two) following the USA men’s team’s attempt to take home the Rugby World Cup Sevens on home soil.

Airing exclusively on NBC in the US, the documentary contributed to the three-day tournament becoming the most-watched live rugby broadcast ever in the USA, reaching nine million viewers.

Part three will pick up the story at a moment of incredible opportunity for both the men’s and women’s teams. With both having experienced great success over the past few seasons, gold in Tokyo could represent the moment the sport finally makes it to the mainstream in the USA and beyond.

Director of the film, Zoomfiji’s Bruce Southwick, said at the launch:

“Being a Fijian director, rugby sevens has always been a huge part of my life. Having the opportunity to go behind the scenes with this incredible USA team – both men’s and women’s – is a privilege as we watch them chase history and realise their American dream.

“The togetherness the teams’ showcase is truly inspiring and we’re excited to be on this journey with them once again.”

The Pioneers part three is set to launch later this year.