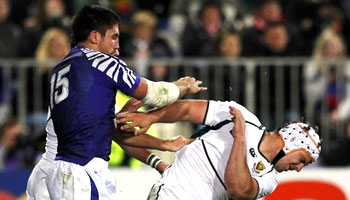 There’s only been one red card at the World Cup so far, so here’s another look at the sending off of Samoan Paul Williams during their 13-5 loss to South Africa last week. A few days back it was confirmed that Williams would face no further punishment.

Anyone who watched the game live will acknowledge that it was a fantastic match but was ill-tempered and poorly managed by referee Nigel Owens and his assistants. Owens unsurprisingly received heavy criticism post match, particularly from the Samoan camp.

Flanker Heinrich Brussow had been held back and after repeated attempts to get free by swatting at Williams’ arms, he was then struck with an open hand by the fullback.

It wasn’t the first off the ball incident of the match, with Owens taking a lenient view on at least two other incidents. Assistant referee Stuart Terheege described this one as a deliberate strike to the face though, hence the red card for Williams.

Replays showed that it wasn’t a punch, and Brussow had stayed down for longer than he possibly should have. All things considered, it wasn’t a huge surprise to see someone receive a red card. Owens evened things up a minute later by yellow carding John Smit for a deliberate knock down.

Williams faced a disciplinary hearing on the weekend and admitted his guilt, and received no further punishment based on the mitagating factors, which included the nature of the strike and the lack of injury that was caused from it.

There’s a few things to note from this incident. Firstly, players who hold back other players should be dealt with more severely. Sure it has always been a part of rugby, but when it’s deliberate and stops a player like Brussow from getting to the next breakdown, it becomes a serious problem.

The second point is that often we see players get away with striking the arm or hand of the player in an attempt to be freed from their grip. Surely both aspects should be addressed and stamped out if we want a cleaner, fairer game.

Take a look at the related posts below they video. They’re good examples of similar incidents, although the difference there is that they show the player being held back striking out.