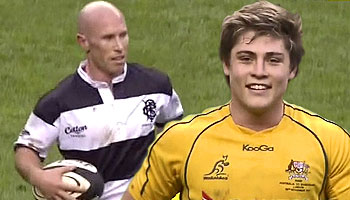 The Wallabies dominated their meeting with the Barbarians this past weekend but one of the rare enjoyable moments for Baa-Baas fans was when Peter Stringer went one better than an attempted charge down, and actually just picked up the ball.

James O’Connor has a bit of an unorthodox pre-kicking routine and it’s not the first time he’s thrown off the charging opposition. In the Rugby World Cup Quarter Final against South Africa there was a kick that he was preparing for when wing JP Pietersen charged and was told off by referee Bryce Lawrence. The kick missed and he wasn’t allowed an opportunity to retake it.

This time against the Barbarians a similar thing occurred, as he made his first move (a subtle foot movement) and Stringer swooped in, got to the ball, took a split second to figure out what to do and then basically just picked it up and jogged off the tunnel for the halftime break.

The look on O’Connor’s face was priceless as referee Romain Poite allowed the Irishman’s intervention, while the young Wallaby was left planted on the sideline with an empty tee and a perplexed grin. “Going forward we’ll probably (talk to referees) because it has happened to me before,” O’Connor said.

“I do it all the time, my little up and down to get my centre posture, if my feet come off the ground that is considered a start…  I’ll have a look at the replay, if that’s the case then it is a fair call. If your feet stay on the ground you’re sweet… I fixed it in the second half anyway.

“I don’t see it as a massive issue, I’ll tweak it in the off season,” he added.

We’ve got tickets up for grabs for the Wallabies’ next tour game, against Wales in Cardiff this coming weekend. Enter here now to stand a chance of winning a pair of premier tickets.