Phil Vickery suspended for leg trip vs the USA 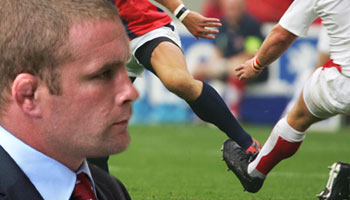 England’s captain has been suspended for 2 matches, both crunch encounters (vs South Africa and vs. Samoa) for this trip on Paul Emerick of the USA.

The American centre gets a floating pass from Mike Hercus, who had intercepted a forced English pass. Vickery then throws a leg out in desperation resulting in what was basically a kick to the shin.

Bath prop Matt Stevens will take Vickery’s place in the starting line up, with Perry Freshwater being promoted to the bench. Mike Catt will more than likely lead the side in Vickery’s absence.

Two matches also a bit harsh perhaps. One match would suffice. But once again, the IRB are trying to make a point.