With just a week to go until the much anticipated England tour of Australia, we take a look at the potential starting lineup and replacements for the first test.

First up we have our front row. The battle for hookers is tight, with established players, Cowan-Dickie and Jamie George being pushed hard by newcomer, Jack Walker. Despite the impressive form the Quins Hooker has been in, it is to be expected that Eddie Jones will look to the more experienced heads to face up the improving Aussies. Having taken over as first-choice Hooker for this year’s six nations, Cowan-Dickie is likely to retain his spot in the starting team with George remaining on the bench.

With no Kyle Sinkler this time, it is widely expected that Bath’s Will Stuart will retain his place as the premier tighthead, with Leicester captain Ellis Genge comfortably owning the loosehead position.

Maro Itoje is arguably one of the first names on the team sheet, so the question is who will join him in the lock? With Jonny Hill having grown into a prolific international player, it could very well be expected that he will partner up with the Saracens second-row. However, with the return of Sam Underhill, it would be no surprise to see Courtney Laws moving back into the second row to take advantage of his sublime handling and hard-hitting.

The back row could very well return right back to 2019, with Curry, Underhill, and Vunipola all teaming up again to cause havoc among the Australian attack.

Number 9 is an interesting one. Eddie could choose two hot young prospects in Jack Van Poortvliet and Harry Randall, or go for the old head of Danny Care. After his performance in last week’s Barbarian clash and the sublime form he has shown for Quins over the past couple of years, Care would certainly be the safe and oddly most exciting bet.

Fly-half, Farrell or Smith? Smith. Farrell has been showing incredible skill since coming back from injury, so to not have the playmaker in the starting team would appear crazy to some. It is likely to allow maverick Smith to flourish, Farrell will take his spot at the familiar spot of inside centre.

That brings us to the outside centre position. With Tuilagi and Slade out injured, this could be a real opportunity for someone to step up and demand a permanent shot at the position. Joe Marchant currently looks to be that man, however as we saw last week, Eddie Jones still has thought of moving the ever-elusive Jack Nowell inwards.

Talking of Nowell, with Jonny May struggling with Covid and Anthony Watson currently out injured, it would be a great shout for him to take the starting birth on the wing. An Exeter stalwart, he can also cover full back to a world-class ability as shown in last year’s premiership finals. Also, don’t forget his unbeatable performance on the flank…

Big Joe Cokanasiga is starting to come back into his best form after a torrid time out, so expect to see him storming down defences on the other wing.

Freddie Steward, straight off the back of Leicester’s incredible Premiership final win, will be expected to provide a safe pair of hands at the back for England.

In regards to the replacements, it could feature anyone to be perfectly honest. However, the expected 8 that we have selected provide a mix of safety and excitement, enabling Eddie to pick and choose depending on how the match is playing out.

See the potential squad below: 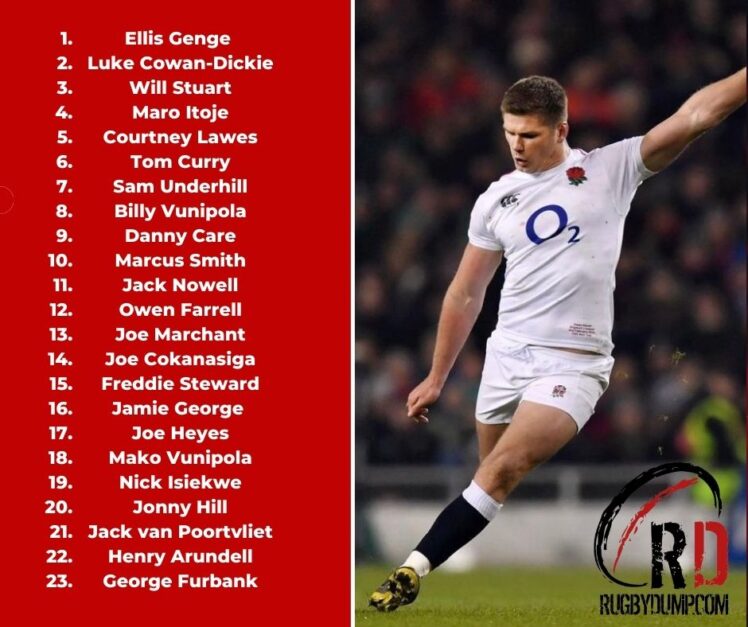