With England fly-halves coming in ten to the dozen currently, one thing England are not desperate for is another number ten.

This past weekend Exeter had their play-off hopes knocked back by a strong Saracens performance, led by England captain Owen Farrell. A noticeable switch to the Exeter line up was seeing Joe Simmonds dropped to the bench, in favour of Henry Slade moving into the fly-half role.

Although often used as a playmaking centre, particularly in the national side, Slade has not pulled on the ten shirt for Exeter since April 2017 when they won away to Harlequins.

Andy Goode, the former England fly-half has been speaking to Rugbypass, giving his thoughts on this positional switch: 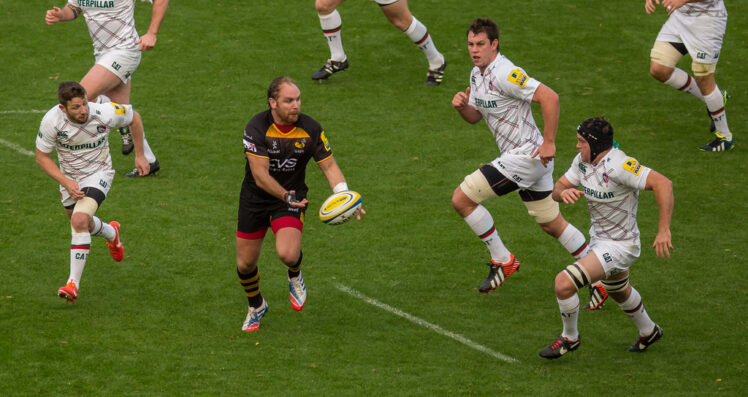 “It’s an interesting one,” he opened. “When they ultimately had their success, Joe Simmonds was captain and fly-half and playing unbelievably well. Now this year early on his form wasn’t great. He got dropped and Harvey Skinner played ten a fair bit. I played against Slade at ten years ago when he was first bursting onto the scene and we played Exeter against Wasps at our place and I was like, ‘God, that is some player at ten’.

“It was around him and (Gareth) Steenson at ten and they gave him a load of goes and it didn’t really work as Steenson was the ten and the kicker and all this stuff. They fitted him into the centre because he is a bit of a flair player as well, so perhaps didn’t first the mould of an Owen Farrell type ten that can lead a team.

“Henry Slade had his moments at the weekend of brilliance but he is not a controlling ten, so that is why he went away from it and made himself into an unbelievable centre, but I always enjoy watching him play at ten. The reasons behind it, who knows? Exeter are not at it as a team so maybe they are trying to look at some fixes around trying different combinations to try and find that magic ingredient.

“I know (Tom) Hendrickson and (Ian) Whitten played in the centres, was it about the power of those two? I think it possibly was, getting two big lumpy centres in there. (Saracens’ Nick) Tompkins is a real handful to deal with. But yeah, it was a really interesting selection.

“Exeter have two games left, Bristol away and at home to Harlequins. They can still get ten points, Rob Baxter said after the game, and a lot of those teams in the middle are playing each other as well. They can still make the playoffs. Will they make it? They have got to get ten points to do it because it is out of their hands.”