Premiership Rugby has released its salary cap report and it makes for interesting reading ahead of this weekend’s premiership final between Leicester Tigers and Saracens.

For their part Saracens have truly rebounded in remarkable fashion following their season in the Championship. Of course, the relegation itself was unlike other teams who have been relegated as by and large Sarries held onto their most important players.

For those unfamiliar with the situation, Saracens were fined a whopping £5.34m and docked 105 log points for repeatedly breaking the salary gap that is set in place for fair play.

The three time European and five-time premiership champions came under significant scrutiny following the revelations of their cheating with many fans calling for their titles to be stripped.

In direct response to salary cap breaches a significant inquiry was launched and was spearheaded by Lord Paul Myners. Whilst the report itself was significant offering 52 recommendations, the crux of the report as the need for more transparency around club’s wage bills.

As Premiership Rugby chief executive Simon Massie-Taylor said: “One of the main principles set out in the Myners Report emphasised the promotion of greater transparency, to broaden and deepen visibility and scrutiny about how the salary cap operates in practice.”

Thus, this report shows the salary cap compliancy of all 13 clubs across the Premiership.

Before delving too deep into the detail it is worth noting that whilst Saracens issues are well documented. The Tigers too have found themselves on the wrong side of the side of the salary cap as they copped a £310,000 fine as recently as March this year for repeated salary cap infringements over the previous four seasons.

The report itself is as a thorough as one would expect following the scrutiny put on the administrators following the Saracens revelations.

Starting with a breakdown of why the salary cap is in place and shows an interesting breakdown into how the cap itself works.

The following graphs gives a real insight into how teams can manage their cap efficiently. As you can see the Premiership are pushing clubs towards using their home-grown talent rather than simply importing foreign stars. 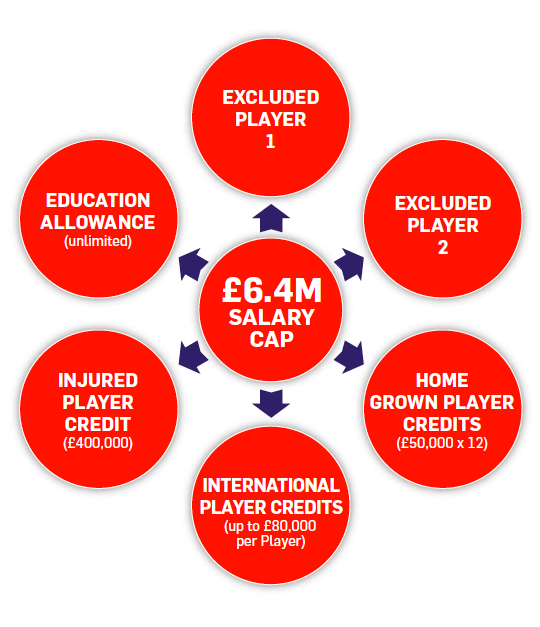 In total the 13 clubs spent a total £94,772,353 on their senior squads for an average of £7,290,181 per club. Given that the salary cap itself was £6.4m in that period, it shows just how crucial the homegrown player allowance is for clubs to have sufficient depth.

Interestingly the breakdown in average salary per position shows a substantial difference between the top paid group (Flyhalfs) and the lowest paid group (Hookers). 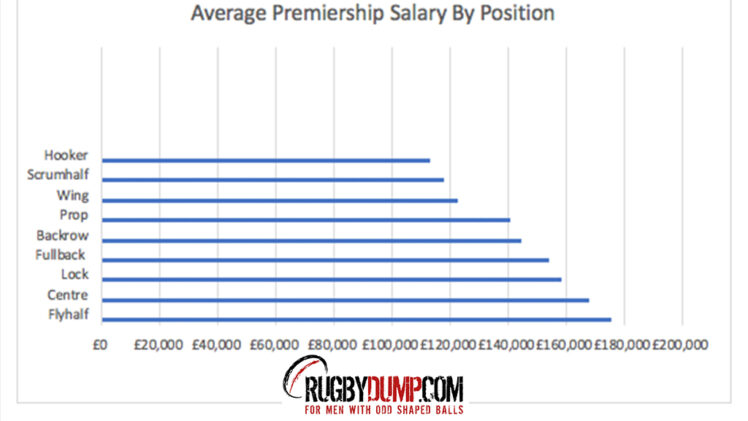 Whilst there is little surprise in the flyhalf position commanding the most money based on the premium placed on the position, the fact that the hookers appear to be significantly undervalued is interesting.

Taking into account the physical demands of the position and the scrutiny placed on set piece, one could be forgiven for assuming the position would command a higher premium.

In a similar vein the scrumhalf is the lowest paid position of the backline players, this could in part be reflected in the current English international set-up where Eddie Jones has remained true to Ben Youngs throughout his tenure.

As such whilst there are certainly quality English scrumhalves coming through, off hand it would appear as though they have yet to match the heights achieved of players such as Ireland’s Conor Murray who currently commands a £470,000 per year salary at Irish giants Munster.

For their part the Locks are currently the highest paid forwards with an average salary of £158,617. This figure however could be skewed based on players such as Maro Itoje who has a reported annual salary of £800,000 and Wasps Joe Launchbury who is reported to bring in north of £400,000pa.

Whilst the top end of any league or sport will command a hefty price tag, the question of the average player salary is an interesting one. On one hand the clubs must remain sustainable whilst on the other hand the physicality involved in the sport more often than not leads to a relatively short career as well as the obvious toll it takes on the body long term.

For the full report you can find it here. Let us know your thoughts in the comments section, are Premiership players by and large underpaid?

Posted By: Philip Bendon
Thanks
Sorry there has been an error