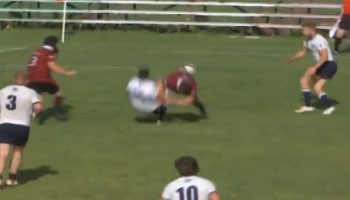 There have been quite a few requests for this big tackle clip from the Canadian Rugby Championships (CRC) in the last few days, so even though the quality isn’t amazing and there are no replays, it’s worth sharing because it’s a great shot from a veteran player.

Loosehead prop Frank Walsh, playing for The Atlantic Rock vs the British Columbia Bears, found himself out on the wing in this recent CRC game. So when play came his direction, he did what all good props would do – took the opportunity to lay into the opposition fullback, Sean Ferguson.

As you can see, it was a massive blow and Ferguson stayed down for a while, but soldiered on.

Also worth noting is that there was a two man overlap out wide, and only his tighthead with him, so the decision to come in and make the hit was well summed up, and perfectly executed.