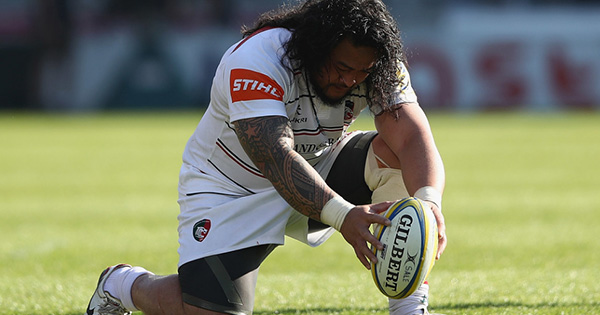 Leicester Tigers got the 35-13 bonus-point win against Sale in Premiership action at the weekend, ensuring a spot in next season’s European Champions Cup. It ended on a fun note as giant prop Logovi’i Mulipola lined up to take a conversion in the dying moments.

Mulipola has been an incredibly popular player with the Tigers and has called time on his current club, electing to sign with Newcastle Falcons for next season.

???? … a special message for the #TigersFamily from @LogoviiMulipola after his final appearance for the club. pic.twitter.com/KzCDvngIOS

However, that didn’t mean things needed to end on a sour note. After subbing on as Dan Cole’s replacement, the script was flipped when the Tigers secured a bonus-point as Jonah Holmes crossed for his second try late in the second half.

The match was a foregone conclusion and all that remained was the conversion – a mere formality in light of the final outcome. Up strode Mulipola for the final kick, closely flanked by his teammates.