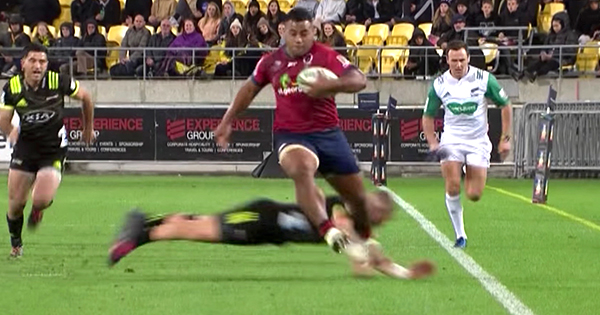 The Hurricanes edged the Queensland Reds earlier today with a hard-fought 38-34 win in Wellington. Both sides scored some top quality tries, but fan-favourite Taniela Tupou caught the eye with this impressive effort in the second half.

The dynamic front rower showed that famed power down the left wing as he fended off All Black Nehe Milner-Skudder with ease, then got past [usually] tough-tackling scrumhalf TJ Perenara.

The inside ball for Jordan Petaia set him away, after Tupou himself had scored from close range earlier in the match, giving the visitors their first of four tries on the night.

“So for a tight head prop, scrummaging is a great foundation – become the best in the world, become world class. Your lifting in the lineout, your kick-off work, your break down, your defence. Just your rugby smarts, your skillsets.

“It’s great. He’s at the beginning, with a tight head, perhaps a 15 year career. He’s just a youngster at the moment and he’s got that special x-factor about him which is really cool. It’s all part of it.”

Perenara said after the match that it’s a tackle he should have made, regardless of the player.

“I just missed the tackle.. It’s a tackle I’ve got to make regardless of who that is out there.

“I’d usually probably go for a tackle to take him out, I went for a passive tackle to try to chop him and a player like that, he’s explosive, he’s powerful and you’ve got to put a bit of body in front of him than that.”

The Reds bounced back from their embarassing 63-28 loss to the Sunwolves last weekend to put in a far stronger showing, against the league leaders. The losing bonus point and the manner in which they tested the Hurricanes pleased coach Thorn.

Home winger Ben Lam scored another two tries, further cementing his chances of selection for the All Blacks. He has now scored 14 tries in this campaign, one short of the Super Rugby record.