In the wake of the shocking news that Argentina skipper Pablo Matera has been stood down and stripped of his captancy due to a number of racist tweets from almost ten years ago, a theory published by The Herald states that it’s believed this was in response to what transpired this past weekend.

In tweets that have since been deleted, including the entire account, Matera tweeted a number of xenophobic comments, including those against blacks, Bolivians and Paraguayans.

He and other senior players Guido Petti and Santiago Socino are all suspended for various comments, made on twitter between 2011 and 2013.

While all in Spanish, some are believed to have said things like “Today is a good day to get in the car and drive over blacks.” and “SOUTH AFRICA baby! I’m finally leaving this country full of blacks.”

The shocking revelation comes just three weeks after leading his country to arguably their biggest achievement to date, a 25-15 win over the All Blacks.

The Argentina rugby union held an emergency meeting and have decided his position as captain will no longer be possible.

“The Argentine Rugby Union strongly repudiates the discriminatory and xenophobic comments published by members of the Los Pumas team on social networks …,” the UAR said.

They went on to say that Matera’s captaincy will be revoked, the three players will be suspended and a further disciplinary process will need to take place.

“Although the messages were expressed between 2011 and 2013 and do not represent the integrity as people that the three showed during this time in Los Pumas, from the Argentine Rugby Union we condemn any expression of hatred and consider it unacceptable.”

“Today I have to take [responsibility] for what I said nine years ago. I am very ashamed. Apologies to all those who were offended by the atrocities I wrote.

“At that moment I did not imagine who I was going to become. I’m also sorry to my team and my family for the moment they are going through … and thanks to the people who love me for their support.”

Petti and Socino are also accused of discriminatory texts, some of which are highly sexist towards domestic workers. 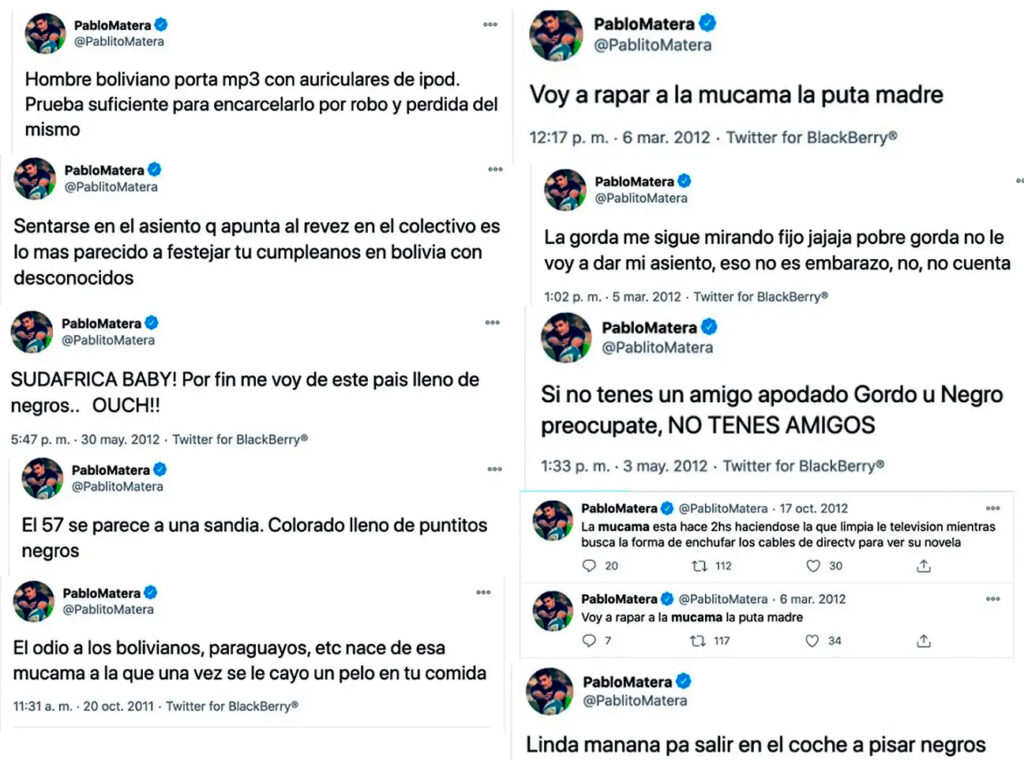 While the tweets were there for all to see, for many years, a new theory states that they were dug up in retaliation for the perceived lack of respect shown by the Pumas team following the passing of football legend, Diego Maradona.

According to the Herald, Argentina fans were extremely unhappy with their team’s lack of action, especially after New Zealand’s Sam Cane went viral for a show of respect, as he lay down an All Black jersey with the number 10 and ‘MARADONA’ on it, ahead of the Haka.

Reportedly, sources close to the team believe that the tweets getting out could be part of the intense backlash after the Pumas only wore black armbands and didn’t do much else, then got soundly beaten 38-0.

Thousands of posts on social media confirm the general feeling from their fans, which led to Matera actually issuing an apology, along with the entire squad, from the team’s hotel on Monday night.

“We know that the tribute we did for Diego caused disappointment, but we wanted to tell you that it was by no means our intention. We did not want to stop apologising to them, we wanted to tell them that Diego is always present and is an important person for this team,” they said.

Matera reached unbelievable highs just a few weeks back after beating the All Blacks, and was praised for his generosity when he was seen on camera giving his jersey to an emotional young fan.

The moment went viral and he was seen as somewhat of a hero for his country, with Dan Carter even joining in.

It remains to be seen when, or if, we’ll see him turn out for the Pumas again and in what capacity.