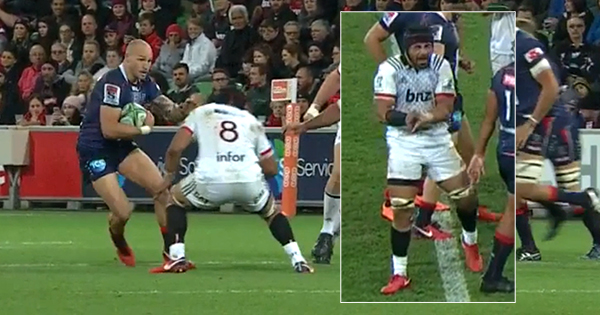 The Crusaders put in a typically powerful display to blow the Melbourne Rebels away on Friday, closing things off with a late try to seal the 55-10. There were a number of big collisions throughout, especially in a tight first half, with this the pick of the bunch.

As the Rebels looked to attack from set piece ball, Billy Meakes ran it up in midfield but was stopped in no uncertain terms by loose forward hitman, Jordan Taufua.

The number eight, playing there due to Kieran Read being out with injury, lined him up and put him on his backside in a commanding tackle. He unfortunately then knocked the ball on, but wasn’t too bothered as he was fired up after the hit.

The 45-point win for the Crusaders was their biggest win on Australian soil, pleasing coach Scott Robertson, who was impressed with the second half in particular.

“The Rebels were courageous for a good half of the game. At haf time our plan was to hold the ball and put a lot of pressure on them to make tackles and we had the ball a little bit more in the second half and managed to score those tries,” he said.

Rebels coach Dave Wessels also touched on the first half performance, saying he was frustrated.

“I thought in the first half we were in the contest. We made a couple of really key erros which they scored right away from. I can think of three, and they scored 21 points just like that. That’s why they’re the best team in the comp.

“We’ve got to figure out what happened there, and there’s a lot of technical things that we missed.”