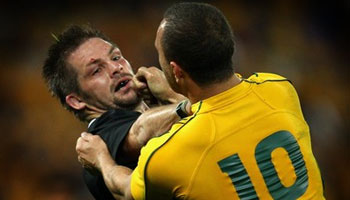 Quade Cooper dodged a bullet earlier today as he was cleared of any wrongdoing after being cited for kneeing the head of All Blacks captain Richie McCaw during the Wallabies’ historic Tr Nations victory in Brisbane on Saturday night.

Cooper, who has had a recent history of niggle with McCaw for some reason, is now getting a bit of a reputation, particularly within the New Zealand camp, as a cheap shot merchant. It’s not the first time he and McCaw have exchanged handbags.

SANZAR judicial officer Jannie Lubbe was quick to dismiss a charge of striking however. Cooper has admitted that he made contact, but said it was accidental as he was trying to get up.

“It’s rugby and blokes are coming into contact belting each other week-in week-out, and it just so happens two blokes come into contact more often than not. I don’t see any history there,” he said.

Coach Robbie Deans acknowledged that Cooper needs to be mindful of how he behaves.

“There’s a next generation of kids watching that game and it’s important that the way we play the game is something we’re proud of and something that we leave behind that they want to follow,” Deans said.

Richie McCaw, who was at the bottom of a ruck up to his usual disruptive self, said that he didn’t see it coming, but certainly felt it. Fellow loose forward Victor Vito has said that they’re aware of Cooper’s antics.

“I didn’t get much of a view of it but apparently it was more than once anyway [the niggle]. Some of the guys are starting to say that sort of stuff about him,” he said.

Coopers seems lucky to have gotten away with that one, as you’d have thought he could have avoided McCaw’s face if he really wanted to.

What do you think of the incident, and the result of the judiciary process?