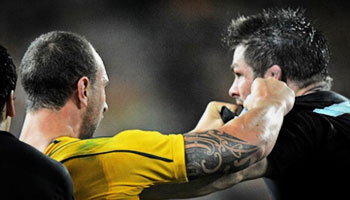 Wallaby flyhalf Quade Cooper has had a tough tournament so far. The Waikato native has been anything but the all singing, all dancing performer he was for the Reds in Super Rugby. He’s off form, and the Kiwis haven’t given him an inch.

Sparked by his mini-feud with All Blacks captain Richie McCaw, Cooper has become public enemy number one in New Zealand. He’s been booed at every match of the tournament. He’s not in the good books. The message? Mess with Richie, and we’ll mess with you.

Whether that has affected his game, or it’s been other factors, only the man himself will know. What is evident though is that he’s been far from himself, and under pressure not only goes into his shell and fails to deliver what he’s been known for, but he also makes mistakes, bad ones.

To beat the Wallabies you’ve got to rattle Cooper and get Will Genia’s forward pack going backwards. Ireland did it, South Africa almost did it last week, and you can be sure that the All Blacks will be targetting the immensely talented halfback combo tomorrow.

Kurtley Beale is out, injured, so Australia lose a bit of firepower there. Anthony Fainga’a comes into the midfield though, which means they tighten up on their already impressive defense. Cooper will be targeted, but with Dan Carter out and Aaron Cruden in, he may just step up.

The entertaner is due a big game and tomorrow will be a true test of the man, as a hostile and unforgiving Eden Park do all they can to prevent him from bringing out his bag of tricks.

This fascinating clip from ITV looks at the way Kiwis view him in New Zealand.