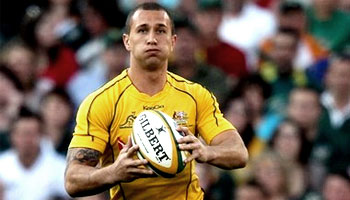 This is a quick clip that has been requested from this past weekend’s Tri Nations game between the Wallabies and the All Blacks. It features Aussie flyhalf Quade Cooper showing his moves as he dances his way around Cory Jane.

Cooper, after having a brilliant season for the Queensland Reds in the Super 14, has been an integral part of the Wallabies plans for the tournament. He unfortunately sat out for a few weeks after a spear tackle though, so despite showing moments of magic, hasn’t really set the stage alight like many had hoped he would.

In some ways, for the Wallabies, that’s not a bad thing as he’ll now know how much work he still needs to do ahead of a huge upcoming year. There’s no doubting his talent and right now he’s one of the most exciting players in the game. He also showed impressive maturity on the weekend with a few well placed kicks for the corner, and seems to be working hard on his defence.

Cooper, despite still only being 22 years old, has been around a while and although the razzle dazzle will always be there, his goals of achieving greatness will take some time in coming. His all round game seems to get better each time he plays and the maturity he’s shown in recent times, both on field and off, will stand him in good stead.

While there was major speculation about him making the move to League, he recently announced an extension on his contract with the ARU that secures his services for at least until after the World Cup in New Zealand, his land of birth, next year.

While the NRL may well be in his future, for now we can enjoy moments like this one on against the AB’s, where he made the fleet footed Cory Jane look like a pie munching front rower.