Questions raised about lifters in RG Snyman injury on debut 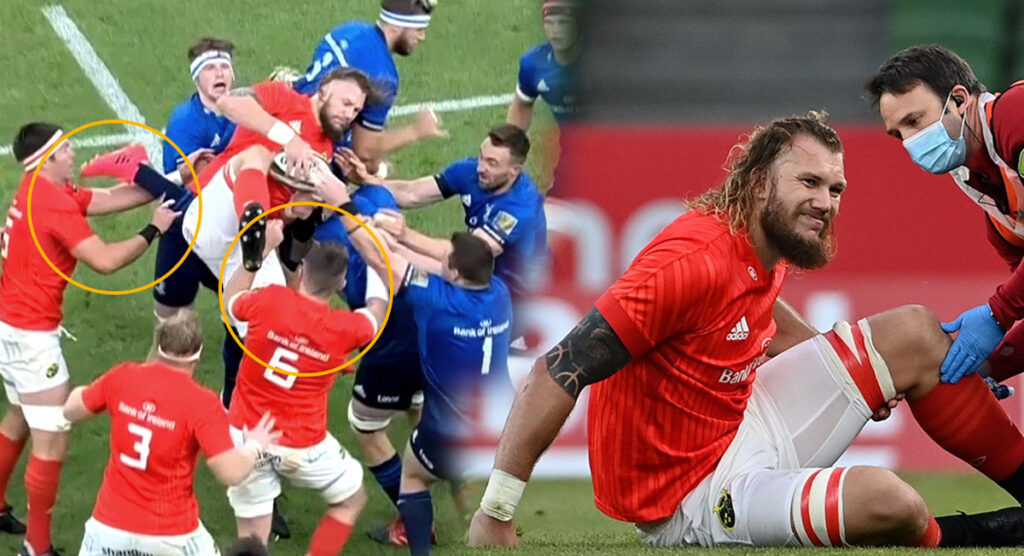 Another notable name was added to Munster’s growing injury list this weekend when new signing RG Snyman came off within the first ten minutes of their contest with Leinster at the Aviva Stadium.

The province revealed the worst possible news on Tuesday that the World Cup winner tore his ACL and is set to be absent for almost a year. This not only slashes through his two-year stay at Thomond Park, but also throws his chances of making the Springboks squad for the British and Irish Lions tour next year into jeopardy, let alone any Test fixtures before then.

The injury came when the lock landed awkwardly following a steal at the lineout, and since then a discussion has emerged online regarding the responsibility of his lifters.

Many lineouts are completed in a match without any problems, but there is always an inherent risk in the set piece. Moreover, the risk is greater in defensive lineouts where the players are far more impulsive as they are reacting to what the opposing players are doing.

This potentially prevents the lifters, and even the jumpers, from being as secure and stable as the team in possession are, who more or less know where to be and what to do in the process. As a consequence, a player like Snyman in this case, can be left in a hazardous position.

His lifters were Billy Holland and Peter O’Mahony on Saturday, and while they did not ensure that the South African landed as safely as possible, they can hardly be blamed as it is not that uncommon to see a player free fall to their feet.

That is gut-wrenching for Munster. RG Snyman doing his ACL 7 minutes into his debut. Losing a world class forward. Same for SA rugby + Lions tour. Really shows the importance of the lifters to be able to bring any man down safely. Sometimes its just unlucky and can go wrong.

Not much being said of his lifters.

Questions over how many physical lineout reps were done should be answered.

There are player welfare issues that Covid is "forcing" squads into.

A shame to see Snyman off so early. He can’t be too happy with his lifters

Aargh that’s awful. RG Snyman off after 7 minutes because his lifters didn’t support him properly.

Lifters do have a duty of care at every lineout to ensure their teammate, and their opponent lands safely, but there are often mitigating factors. A crooked throw can set the jumper off balance, while the player competing for the ball can cause havoc, and that is understandably why players are often penalised for infringing at the lineout.

An injury like this will always evoke questions surrounding the safety of the lineout, and law tweaks are often made to achieve that. But more than anything at the moment, all those involved with Munster will be rueing the absence of one of their landmark signings for the rest of the season and well into the next.