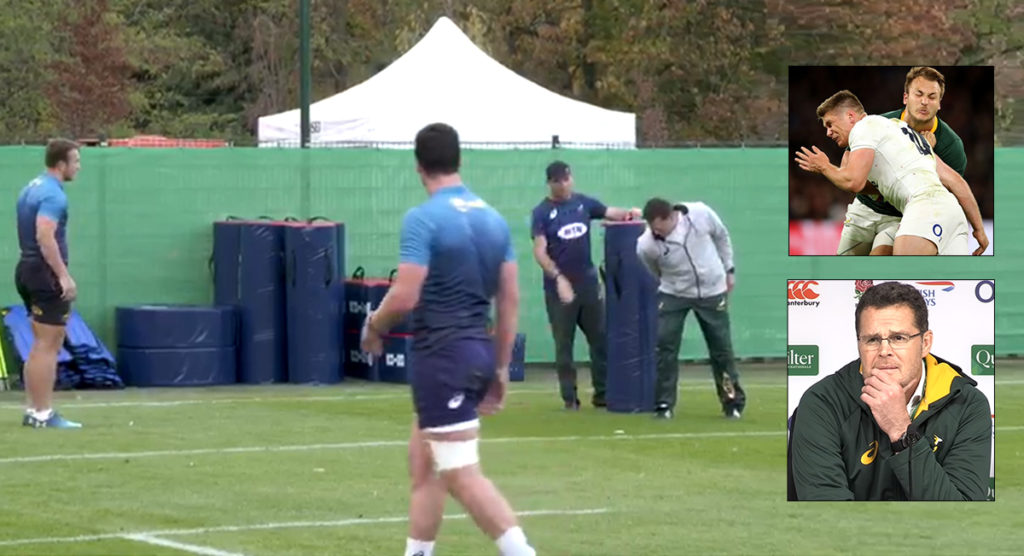 While fans have clearly been divided over the legality of the Owen Farrell tackle at the end of the England vs South Africa Test at Twickenham, Springbok coach Rassie Erasmus has kept a sense of humour about it, with yet another light-hearted dig at World Rugby.

The 12-11 loss for the Springboks came about through a number of poor errors and a late missed penalty, but Farrell’s huge hit with time up might have allowed them to sneak out of jail, should Handre Pollard have slotted the resultant penalty.

Referee Angus Gardner made a fairly snappy decision when referring to the TMO, ruling that he saw enough of an attempt to wrap the arms.

Coach Erasmus said in the post match press conference that if that way of tackling is legal, then that’s great and he must teach his players.

“If it was legal, we should just do it because it’s very effective,” Erasmus said.

“To tackle a guy like Andre Esterhuizen like that and stop him in his tracks, that’s unbelievable.. So, we just have to try and practice that.”

He was of course saying it tongue in cheek but there was also some seriousness to it as to allow tackles like that sets a fairly dangerous precedent.

True to his word, this video of Erasmus coaching Esterhuizen how to tackle with the shoulder has been ‘leaked’, with the amusing footage being spread on social media today.

It’s clearly some light-hearted banter, but some have been completely wound up by it, while others get the comedic aspect of it.

Pro rugby can be boring.

This is clever & funny IMO. This is clearly pointed at World Rugby, inconsistencies lack of transparency over what is acceptable and not. Tackle situation is a complete mess

Former England flyhalf Andy Goode meanwhile has called for World Rugby to issue a statement so that fans, players and officials can get some clarity on the issue.

“It’s not a high tackle, he’s made no contact with the head and there’s no way it’s a red card offence. As a result, he can’t be cited for it,” Goode said in his Rugbypass column.

“It is a penalty, though, and I think it should have been a yellow card for no arms in the tackle as well. I’m sure a penalty would’ve been awarded if it was in any other minute of the game but the clock was in the red and that does complicate matters, even though it shouldn’t.

On the specifics of the tackle, Goode says that the ‘he made an attempt to wrap’ argument is irrelevant.

“Farrell makes contact with the right shoulder and there is absolutely no attempt to grasp with that arm. There was enough of an attempt to wrap with the left arm but that isn’t the shoulder that’s making contact, so that is an important detail.

“His right arm is tensed and is by his side and he’s swinging his shoulder into the tackle. Had the right arm been up and more horizontal, ready to wrap around the ball carrier, it might have been ok but to me it’s a no arms tackle and a swinging shoulder and it should’ve been a penalty for sure and nowadays a yellow card to boot.

“Rassie Erasmus suggested after the game that if that was a legal challenge, maybe we should all be doing it and I think that’s exactly what World Rugby don’t want.

“I think they have to say something. The referees are meeting in Cardiff this week and it’s vital for everyone’s understanding of the game now that we hear their verdict.”