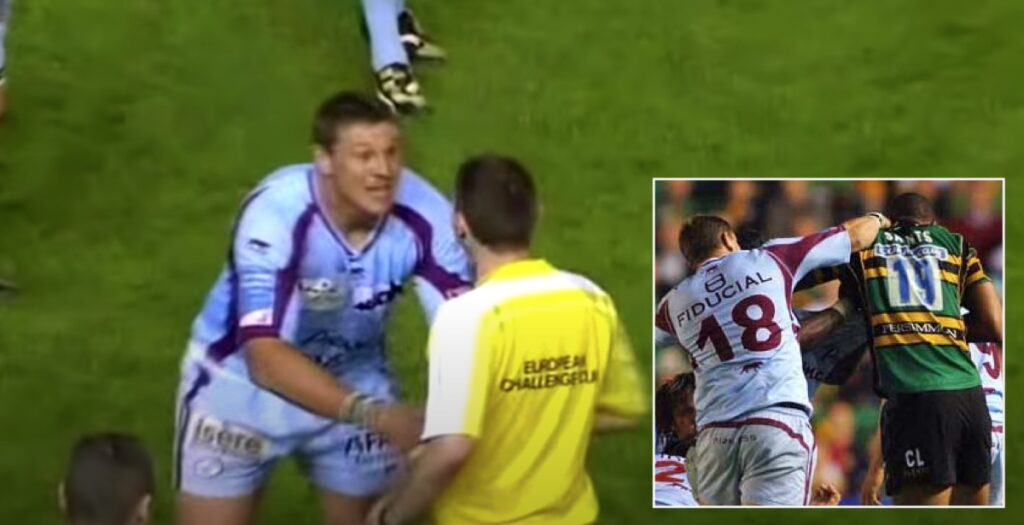 During the 2009 European Challenge Cup final between Northampton Saints and Bourgoin fans witnessed one of the biggest head-losses in professional rugby.

The game was feisty from start to finish with plenty of punches and yellow cards even in the first half, but in the final five minutes the match spilled over into carnage.

Courtney Lawes found himself engaged in a confrontation away from the action when Bourgoin replacement Thomas Genevois threw a huge haymaker to the back of his head, sending both sets of players into a brawl.

Once the violence had settled Genevois was called over by referee George Clancy and as the official reached for his cards, the Bourgoin flanker tried to physically prevent Clancy from showing him red.

Genevois then ironically clapped at Clancy over the decision before storming off the field to sit in the stands in front of the raucous Saints fans at Twickenham Stoop.

But the action didn’t end there. Lawes, clearly still upset by the actions of Genevois, put in a cheap shot on a Bourgoin centre just a minute later sending him into the sponsor boards at the side of the pitch, sparking yet another melee.

Although the game ended on a sour note it was eventually Northampton who lifted the trophy after beating Bourgoin 15-3.