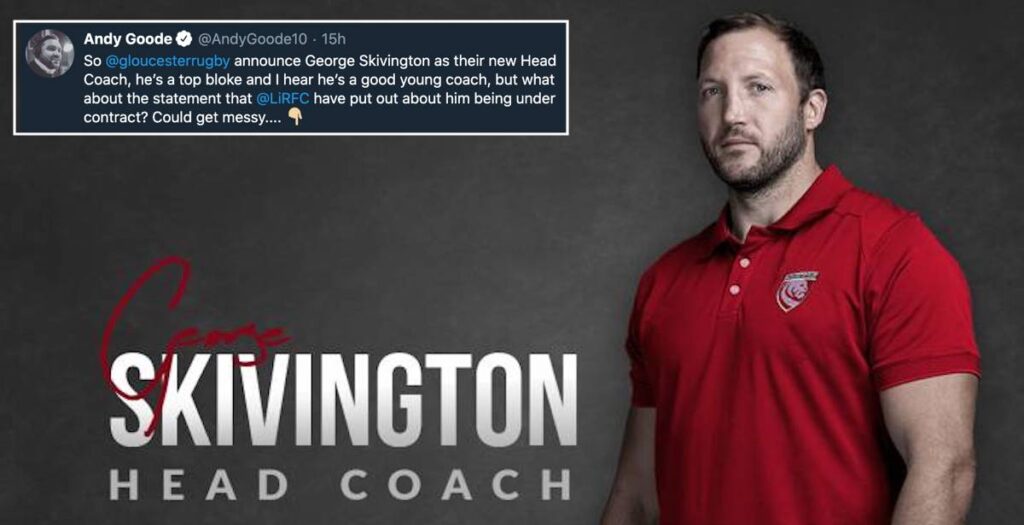 The announcement of George Skivington as Gloucester head coach has left a bitter taste with London Irish who believe Premiership protocols have been breached.

Skivington had been forwards coach at London Irish since retiring as a player in 2016 and Gloucester announced his appointment as head coach online yesterday, Saturday 27 June, to replace the departed Johan Ackermann.

London Irish will consider all its options following Gloucester’s announcement of George Skivington as their new Head Coach.

Skivington remains under contract with London Irish and the club believe @premrugby protocols have been broken.

“To say we are disappointed with Gloucester’s announcement is an understatement,” said Facer.

“George is well liked and respected at Hazelwood, and it is understandable that we would not want to lose him, especially so close to the resumption of play after the lockdown. We also know that he is an ambitious young man who would relish the opportunity of being the Head Coach of a club someday.

“However, the protocols are clear that a club must be approached in writing when there are more than six months remaining on the relevant contract, regardless of whether it is a player or coach.

“George is under contract with London Irish until June 2021 and has not served us with the required notice period, nor have the terms of his contract been breached. More importantly, at no point have we received any proactive communication whatsoever from Gloucester.

“We therefore believe that Gloucester have breached the Premiership Rugby Code of Conduct regarding inducement and approaches to a contracted player, member of coaching staff and other contracted person.

“This is a most serious issue so, accordingly, we are reserving our rights to consider all our options under the Premiership Rugby governance protocols and other avenues of redress.”

However following the release of this statement, Gloucester has responded with their own version of events leading up to the appointment of Skivington.

Although not as straightforward perhaps as it initially seemed… https://t.co/HVymW5MWWJ

This is the most exciting announcement of a head coach I’ve seen in rugby, foreword thinking. The type of man you build a club around. Very grateful I’ll get to play out my last years under him 🍒 https://t.co/I9Y2vOxC3Q

So ⁦@gloucesterrugby⁩ announce George Skivington as their new Head Coach, he’s a top bloke and I hear he’s a good young coach, but what about the statement that ⁦@LiRFC⁩ have put out about him being under contract? Could get messy…. 👇🏼 https://t.co/FvGMEEyegw