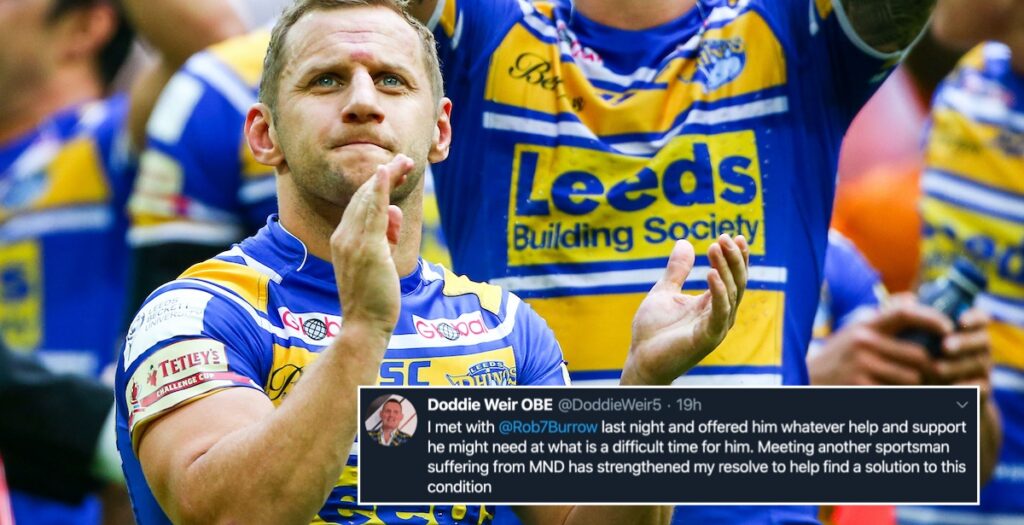 Rugby union players from all over have jumped to support former England rugby league scrum half Rob Burrow after he was diagnosed with Motor Neurone Disease.

The 37-year-old announced the news of his diagnosis on Thursday 19 December and the response over social media has been incredible.

Burrow made nearly 500 appearances for Leeds Rhinos throughout his career and earned himself 72 caps for England and five for Great Britain before announcing his retirement in 2017.

Burrow won eight Super League titles over his 16-year career and the news of his illness has sent shockwaves throughout both rugby codes.

Following today’s announcement that Rob Burrow has been diagnosed with motor neurone disease a fund will be set up to support Rob in his treatment and his family of three young children under eight.
Here is how you can support that now
➡️https://t.co/jb3ZGZDjdC pic.twitter.com/2L470UJVC3

Today has been a big day for me and my family but I would like you all to know I have read every message and post. I can’t explain how overwhelmed I am at the reaction I have had from people throughout our amazing sport.
Thank you so much from the bottom of my heart!

I met with @Rob7Burrow last night and offered him whatever help and support he might need at what is a difficult time for him. Meeting another sportsman suffering from MND has strengthened my resolve to help find a solution to this condition
https://t.co/W9FaJJGrzq

Such sad news that @Rob7Burrow has been diagnosed with MND. I loved watching Rob weave his magic for @leedsrhinos and I’m sure he’ll fight this disease with the same tenacity as he had on the field. @DoddieWeir5 and his @MNDoddie5 foundation can be a help and inspiration Rob https://t.co/zHIac9Zrij

Devastating news. All of Rugby Union is behind you @Rob7Burrow Hero of mine growing up. Stay strong mate ❤️ https://t.co/1XmP8QX4k3

“I’m taking it as a challenge, I don’t intend to lie down, I want to get stuck into it.”

Leeds Rhinos legend Rob Burrow spoke to us after being diagnosed with motor neurone disease aged 37.