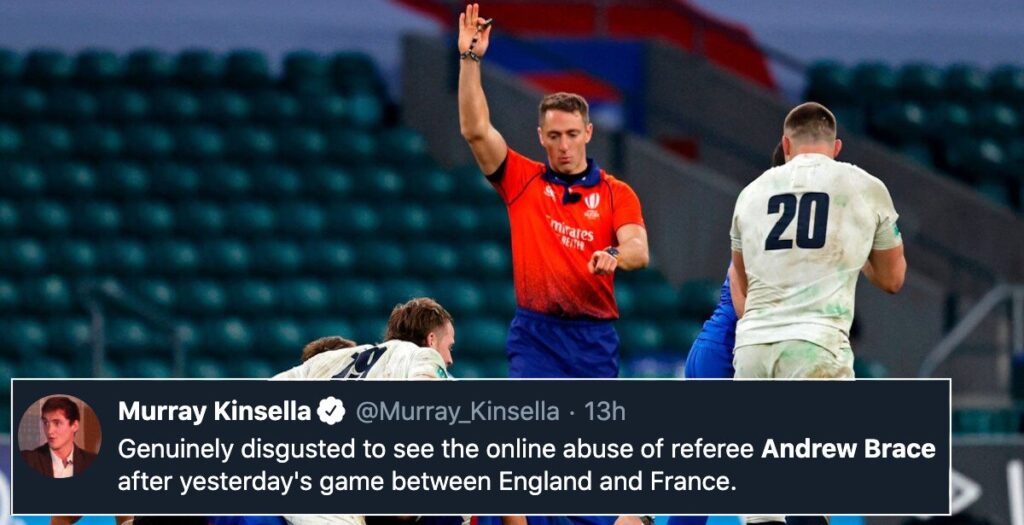 Many supporters were upset by Brace’s decisions late on in the match, which saw England win through the boot of Owen Farrell in extra time. As well as the generic abuse which top flight referees often receive online, some fans took it to a new level by leaving comments on a story about Brace’s late father.

Genuinely disgusted to see the online abuse of referee Andrew Brace after yesterday’s game between England and France.

While some stepped in to condemn the comments, many of the messages are far from tasteful.

Please fellow Frenchmen, I know we are all angry about the performance of Andrew Brace yesterday, but this post is about his dad’s obituary. Show respect to that and stop yelling on it as if you were pigs.
Sorry @bracey1988.

Andrew Brace is a shame for rugby !!! Hopefully we will never see him again in an international compétition, whatever it is !!!

My grandmother would have been a better referee than you, nice fraud, I hope we won’t see you anymore

You are a shame for french people

Do not call a ref a cheat, and don’t do it here. Have some respect.

Brace’s ref mic has also hinted at further controversy after coughing was picked up just before Farrell kicked his last two penalties in Sunday’s final.

The first ‘cough’ came as Farrell approached a penalty kick in extra time in front of the posts, which he narrowly missed to the right.

The second incident, which may be a coincidence, occurred as Farrell lined up the decisive kick in the 95th minute to win the game for England.

It’s not clear who made the noises or if they were intentional, but the timing of both is hard to ignore.