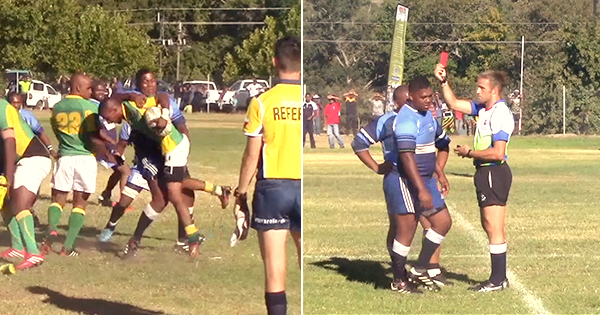 We all know that player safety, particularly regarding the head and neck, has been a key focus for rugby’s governing body in recent years, with dangerous tackles being heavily sanctioned and often debated. This one, however, is as clear cut as it comes.

Canadian referee James Acker described to us what it was like when he refereed his second game in South Africa, and had to deal with this shocking tackle.

It took place in the beautiful region of Franschhoek after Acker had been attending a referee academy in Stellenbosch. This was his first real club game in the area, a pre-season derby match between Simondium and Lanquedoc All-Stars.

As can be seen, the Lanquedoc centre kicked ahead before grabbing hold of the Simondium number nine, tipping him and by doing that, driving him to the ground head first.

“I was so shocked. I whistled to stop time, but actually forgot to stop it on my watch,” said Acker.

“In many years of rugby, I think this is the worst tackle I’ve witnessed.”

He kept his composure in what was no doubt a challenging atmosphere, and after consulting with his assistant on the touch line, showed the offending player the red card.

The injured scrumhalf left the field, but incredibly, he played again the following week.

Acker added that he was unaware of any further sanction, due to the lack of official gamesheets as it was a pre-season ‘friendly’ match.