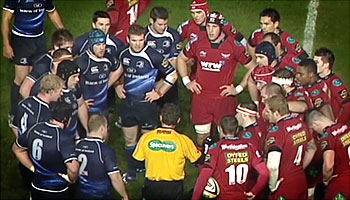 Leinster and Scarlets played to a 17-17 draw on Friday night at the Parc y Scarlets in what was an ill-tempered game. In the first half referee Nigel Owens felt things were getting out of hand, so he took control of things in rather unique fashion.

Leinster flanker Sean OBrien made what looked to be a high tackle after the whistle, sparking a free-for-all on the halfway line that took some time to calm down. The tackle was bad, but the scuffle could easily have been avoided had certain players not got involved.

Owens, upon getting no assistance from his two assistants, chose to have a chat to both teams, calling them to him in rather comical fashion for a good old fashioned telling off.

Youre adults, youll be treated like it, as long as you act like it, was the message from Owens to the 30 players on the pitch.

It is good to see a referee take control of things, basically bringing these professional players back to grassroots level and making them realise that at the end of the day, the ref is the guy in charge out there. One almost expected them to say Yes sir after that.

A while back we saw referee Wayne Barnes show his authority in a similar way as he told off two of England rugbys most senior players, Martin Corry and Steve Borthwick.

Its good to see, and moments like these reiterate why rugbys values will make sure it maintains its reputation as a fantastic game, played with respect by gentlemen, who just happen to be aggressive.

Do you think Owens was spot on, or was it a bit much making such a scene?