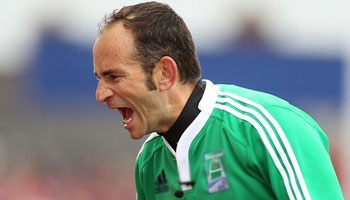 After Ireland’s heavy loss to New Zealand last month some of the Irish fans groaned that the best tackle their team made all game was on referee Romain Poite. Here’s a look at that moment, as well as one from Super Rugby last weekend.

Both referees in the video below were hit unexpectedly, and were probably lucky to not choke on their whistles. The sick side in all of us makes these type of moments enjoyable to watch though, so over the years we’ve featured them whenever they’ve happened. It’s amusing, for some reason.

In the first of these two we’ve got Keith Brown taking a knock from big Sitaleki Timani. The Waratah stuck his shoulder into Brown, who ended up on the floor, not for the first time in his career either. A while back we posted a video of three referees tasting the dirt in one weekend, and Brown was one of them. On this occasion he dusted himself off and gave possesion back to the Waratahs.

In the second clip we’ve got everyone’s favourite French referee, Romain Poite, taking a big knock from Ireland’s Chris Henry during the 60-0 thrashing by the All Blacks. Poite was none too pleased at being smashed from behind, and made his thoughts known to Henry.