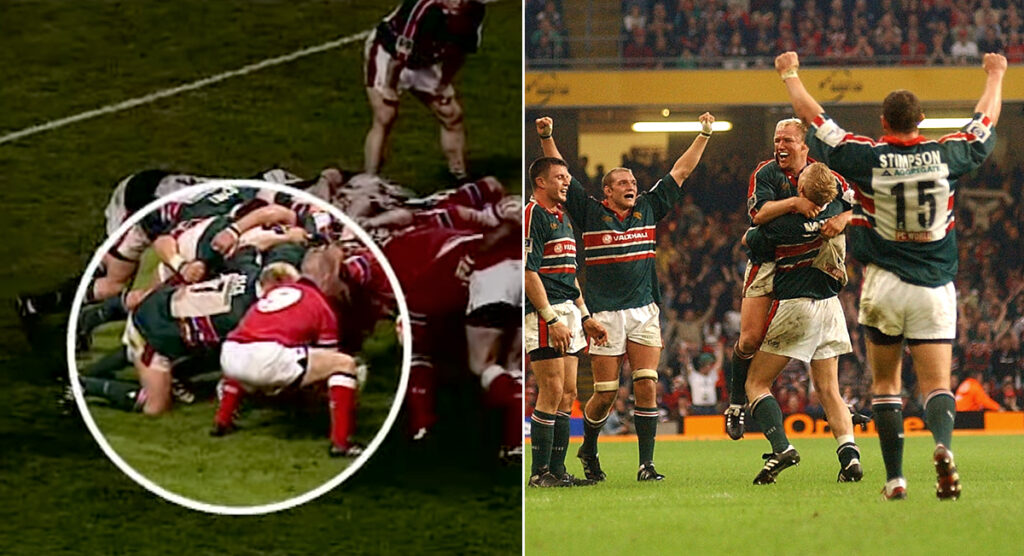 Diego Maradona’s ‘Hand of God’ has been embalmed in the annals of football history as one of the most legendary pieces of successful cheating ever, and one that may not be matched in any other sport. Rugby does have some equivalents though, and the first that will spring to mind for many is Neil Back’s ‘Hand of Back’.

This incident only grows in significance given the context of the match, the season, and of the competition being played.

The affair in question took place in the dying embers of a contest between Leicester Tigers and Munster in 2002, where the Irish outfit, trailing 15-9, had a scrum on their opponents’ five-metre line, a perfect position to launch an attack.

As scrumhalf Peter Stringer went to feed the ball in, Back slapped it out of his hands from the flank of the scrum, effectively feeding the ball to his own side, giving them possession and the opportunity to boot the ball down field.

Stringer protested fiercely to the referee, who was attending to the other side of the scrum at the time, and with no assistance from the television match official in those days, there was nothing the men in red could do. With barely any time left, Munster could not launch another attack, giving the win to the Tigers.

This match happened to be the Heineken Cup final at the Millenium Stadium in front of 75,000 fans, in which Leicester were attempting to become the first side to win two titles, and back-to-back wins for that matter. Munster meanwhile were attempting to become champions for the first time, having lost agonisingly in the final to Northampton Saints two seasons before, and in the semi-finals to Stade Francais the year earlier, by one point on both occasions.

This did not go down well on either side of the Irish Sea, but there was obviously a lot more acrimony the further west. While Back was still lampooned in England, there were more cases of this being penned as gamesmanship, which perhaps only caused more indignation.

Gamesmanship is often rugby’s genteelism for cheating in situations when it does not involve some degree of violence, drugs, deceitful financial dealings, or anything else of that ilk. It is when the laws of the game are toyed with in imaginative ways, and are treated with slightly more jocosity, but nonetheless still cheating.

Now the role of any openside flanker is to not only push the boundary of the laws, but to smash it with a heavy duty battering-ram and see what they can get away with.

Back is revered as one of the wiliest operators to ever wear the No.7 shirt for England or Leicester due to his exploits in the dark arts of the game, and was equally no stranger to the referee’s whistle.

But that is part and parcel with playing in that position, and is why the 71-cap forward is one of the great opensides for club and country. Even Richie McCaw was guilty of this as well, leaving spectators speechless at times with what he got away with.

The problem that many had with this was that it was, or came very close, to being a step too far. The adage that it is only cheating if you are caught will not suffice for many, particularly in the south of Ireland. Opinions of this slap will vary starkly in different parts of the British Isles, but it is hard to deny that Back’s hand has garnered a mythical status in rugby much in the same way Maradona’s has in football.

Perhaps Munster fans may find solace in the fact that they have since lifted the trophy twice, in 2006 and 2008, and this event has been woven into the province’s rich history in European rugby. Meanwhile, Leicester are yet to win another title.