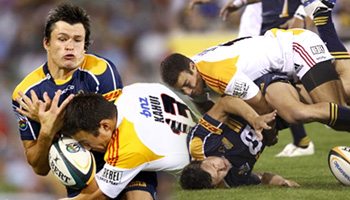 The Brumbies edged past the Chiefs with a late try in Canberra on Friday in an entertaining, eventful, and somewhat historic match in the Super 14.

Flyhalf Matt Tomua scored the late try to seal the 30-23 win after scores were tied with time running out on the clock after both sides had shared the lead on numerous occasions throughout the game.

It turned out to be a great night for the Brumbies, as aside from the win there was a very special moment as Julian Huxley made his return after he had been out of Super Rugby for two years following surgery to remove a brain tumour.

The tackle of the match though was undoubtedly this cracking hit from Richard Kahui on Brumbies fullback Adam Ashley-Cooper. The versatile Wallaby back positioned himself under the high ball nicely, but was smoked by the incoming Kahui.

Ashley-Cooper was left a little dazed for a few minutes afterwards, as you can see the impact of the head on neck on the turf as he want down from the big hit. He did well to carry on though, and showed no ill-effects later in the match.

With many matches in the Super 14, Magners League, French Top 14, and Guinness Premiership this weekend, your help is needed to make sure nothing is missed.

If you’ve seen something you think should be featured on RD, please either send in an email . Match details and the time of the incident too please.