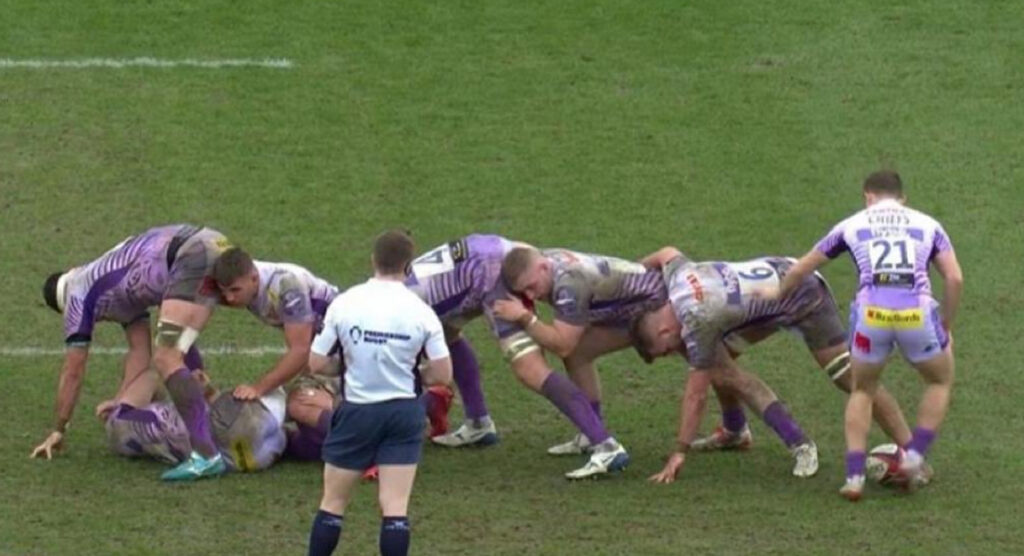 One thing that is slowly creeping its way back into the game of rugby is the use of ladder rucking before a box kick.

This was something that grew increasingly prevalent in recent years, where the team in possession would form a train of players leading back from the ruck to create a greater distance between the scrumhalf and the opposition defence in order to make a box kick easier.

Saracens were the main exponents of this rucking conga, and World Rugby subsequently introduced the five second law at the base of the ruck to counteract this problem. The law states: “When the ball has been clearly won by a team at the ruck, and is available to be played, the referee calls “use it”, after which the ball must be played away from the ruck within five seconds.”

However, this law is so seldom enforced by referees that the tactic has worked its way back into the game again. Often the words “use it” are heard, but very rarely is there any punishment if nothing happens within the next five seconds.

This time round, Exeter Chiefs are the ones who are often associated with this conga, shown no clearer than in their recent Premiership Rugby Cup match against Harlequins. In this match, a train of five players were used, which brings the ball almost five metres back from where the ball carrier went to ground.

It is hard to see how a team could ever set this up in the five seconds that they theoretically have once the ball is playable to the scrumhalf.

Has he got the length in his kick to get over the ruck?

Ultimately, if teams are able to get away with it, they will, as it creates a safe situation for a team to clear the ball without the threat of being charged down. It does equally slow the game down, and create far fewer opportunities for defences to compete, which does affect the sport as a product.

The easiest way to combat such a problem is for referees to adhere to the laws which were originally created to combat this very problem.

This tweet from late last year shows the exact same thing in action.

The sooner this ludicrous loop hole gets taken out of the game the better. Looks ridiculous. @premrugby @btsportrugby pic.twitter.com/RRqmcUbFxh