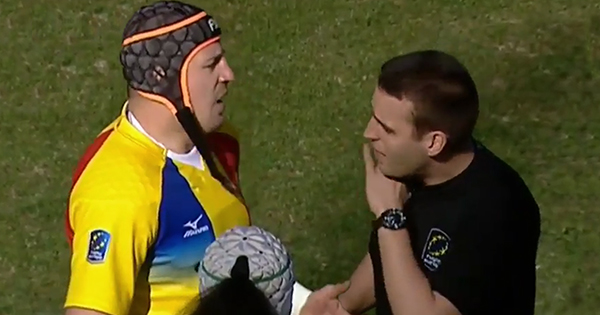 Spain beat Romania 22-10 in the Rugby Europe Championship to find themselves in pole position for Rugby World Cup 2019 qualification. Their task was helped early on when Romania lost a man to the sin-bin thanks to this reckless tackle.

The loss to Spain cost Romania a place in the World Rugby Rankings, as they swap places with Samoa, who move up to 15th, leaving Romania in 16th. Spain, who picked up the win, remain in 19th position but have closed their position behind Uruguay ever so slightly.

It was Spain’s first loss over Romania in six years, leaving them in a strong position to qualify for RWC 2019 and join Scotland, Ireland, Japan and the Play-Off Winner in Pool A.

They were helped in the very first minute in Madrid by Romanian winger Fonovai Tangimana, who was yellow carded for this high shot on Spain fullback Charlie Malie.

The referee had little option but to send him to the sin-bin, giving the hosts the temporary advantage.

Spain’s next two RWC 2019 qualifiers are at home against Germany on March 11, and Belgium in Brussels on March 18. The winner of the pool will face the World Cup hosts to open the tournament, so it looks very likely that it will be Japan vs Spain as the grand opener next year.

It will be Spain’s first time back in the showpiece tournament since 1999.