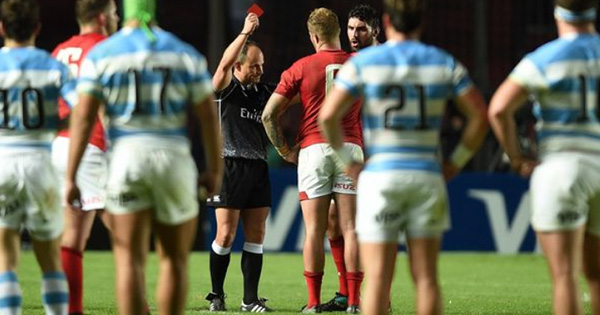 It’s been an interesting few days for Wales in the wake of their series win in Argentina. Their 30-12 victory finds them in third place in the world rankings behind New Zealand and Ireland. Unfortunately, a controversial moment marred the win as Ross Moriarty was shown a red card.

With the win and the series well in hand, Wales were defending against one last attack from Argentina in extra time. Things began to unravel after Nicolas Sanchez appeared to take exception to what he clearly viewed as an overly agressive clear out.

The live action shot and replays show Moriarty leaving his feet while falling over a ruck, perhaps even striking Sanchez in the process.

Ever the provocateur, the fly half followed with a chest-bump and extra shove for good measure. Things took a decidedly nasty turn with Moriarty then grabbing Sanchez from behind for several seconds in a choke hold that was “deliberate and around the neck.”

He was warned three times to let Sanchez go, before prompting even the Pumas physio to step in – an action for which he was lucky to escape further admonition. When things calmed down, Jaco Peyper had no choice but to issue the harshest sanction available.

Even though it didn’t matter, the Pumas took advantage and scored one last try, which Sanchez then converted.

The two embraced directly after the match, so apparently cooler heads had prevailed enough to leave the action on the field. Moriarty also issued an apology after the match.

“Sorry for my reaction at the end of the game… Extremely proud of this squad and our performances on tour. Didn’t want to end it on that note!”

His reaction to those he accused of abuse on social media, however, was less than cordial. “I appreciate the hate messages… when you hide behind your keyboard you maggots.”

On the other hand, the good news for Wales is that they’ve won the series and shot up to third in the world rankings, their highest position since October 2015.