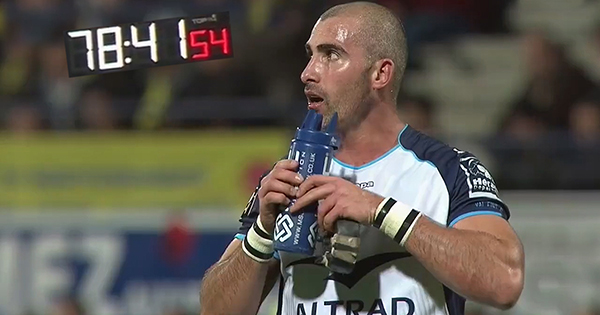 Montpellier got the better of Clermont in their Top 14 clash Sunday night, with former Springbok and Ulster scrum half Ruan Pienaar pulling in a 15-point haul in the 30-29 victory. However, the performance was not without some discussion, as Pienaar made a meal of the time allotted when kicking the game-winning conversion.

Montpellier led just 17-16 at the break, and the second half was also back and forth before a Malietoa Hingano try and Greig Laidlaw conversion put Clermont up by six.

With three minutes to play, giant winger Nemani Nadolo crossed for a try bringing Montpellier within one. As the try was close to the posts, the conversion was almost an afterthought.

But Pienaar, with all his experience, was completely content to use the full 90 seconds allotted for the conversion.

Amidst boos and whistles from the crowd and with only seconds to play, Pienaar finally slotted the conversion. Could Clermont have actually pulled off the win in the time remaining? No one knows for certain. Thus begins the argument between spirit of the law and sportsmanship.

Nonetheless, the win sees Montpellier move into the top spot on the Top 14 table, with 51 points.

Was it outside the bounds of sportsmanship, or was it merely a crafty move from an intelligent player, ensuring a win for his team?