Rugby Training Mistakes: Specificity - Not Training For Your Position 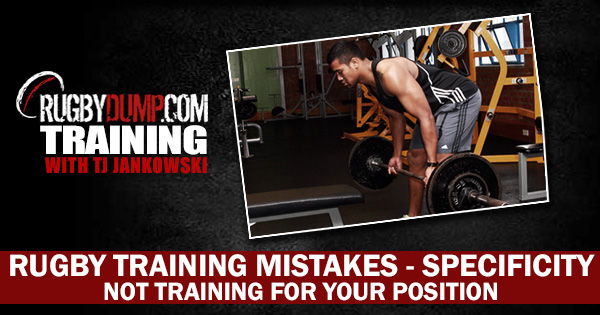 In this new series of articles, Rugbydump Academy’s TJ Jankowski runs us through some common mistakes players make when they are training. Today we look at one component of specificity, and how each position requires different work.

You also need to have a built yourself up in training so that you’re best equipped to avoid injury, and to hopefully last 80 minutes keeping up with an intense game.

These are all general components of a rugby training programme. They are pretty much standard and will feature in every player’s training. But you’ve probably worked out by reading the title that it’s not enough – there comes a point where we need to start getting specific.

One huge debate about England’s World Cup disaster was the decision to play Sam Burgess at centre. Many argued that his physical qualities would be better served as a back row.

Imagine if Lancaster had taken it further and played Anthony Watson at Prop? And then Joe Marler in the back three?

England would have performed much worse right? Why is this? It’s because these players have specific characteristics that make them useful to the team at that position.

Well, in order to get better at these specific characteristics it makes sense that we need to train them.

Let’s look at each position and examine 1 unique principle that they should consider.

As much as they might tell as they exaggerate their 1 try they got from a 2m flob over the line, props have very little need for open field speed and running.

What they will need to focus on, us their upper bodies, particularly their strength in the unique position of a scrum. As much as old-school playstation games would make you believe, no ruck or maul requires the same demands on the neck and shoulders as the front row of a scrum.

Working to develop through in the whole shoulder girdle is going to help you not feel completely beat up the next day, but also help you dominate your opposite number.

In today’s rugby world, hookers are pretty much always a hybrid between back-rows and props, some are closer to one than the other but for the most part they are a hybrid.

A hooker’s performance however is often judged by his line-out success, a movement which comes from a strong core. This needs to remain solid throughout the game to keep the throwing consistent, accurate and effortless.

Developing a strong, dynamic core can help you focus on the rest of your game knowing that hitting your lineouts is sorted.

I’m going to approach a lock’s uniqueness in a different way. If you’re a lock, you’re tall – there shouldn’t be questions about this. Now you shouldn’t be satisfied with just hitting rucks, you need to do more – look at modern-day locks, they are all dynamic players with ball in hand and on defense.

This dynamism doesn’t come easily to taller people, it’s just physics. A keen look at power can transform a lock from some a gangly guy that is only useful in the lineout into an attacking and defensive weapon!

If you play in the back row you know that you need the widest set of physical demands in a rugby game. Sharing many characteristics of both the backs and the forwards, back rows need to have it all.

Unfortunately that doesn’t mean actually doing it all – you need to find the perfect balance of all qualities. The challenge of this is doing enough work to ensure progression, without doing too much and causing burnout (something for a later article).

Taking time to decided what your weaknesses are and working on them is important, but don’t neglect your current strengths!

Obviously a scrum half needs to be extremely efficient with their passing, that goes without saying. A quality scrum half also threatens around the ruck, this is a quality that can really be improved with smart training.

The speed and agility in such a short space is important, but the capacity to remain a threat from the first ruck into minute 80 is essential. Work on getting fast feet and you’ll continually threaten the defence, which in-turn will give you more time to get away good ball.

Contrary to what some fly halves appear to look like (not naming names), these guys need to be among the fittest on the pitch – the influence a fly half has on a game is second-to-none.

Having high work capacity is not only going to get these guys in the right place, but is also going to help them make their best decisions for the team when times are tough.

Like back rows, centres need a combination of a number of positional characteristics. These guys need to be as comfortable in the open field as they are in small space collision, this needs to be done all over the pitch. Again, there needs to be a unique blend of work, this time featuring more speed due to the opportunities that occur to these guys on a pitch.

Pick which component you think is going to really push your game to the next level and go for it.

As rugby has evolved so have wingers and full backs, these guys need to be capable of evading and making tackles using their physical strength now. However whilst it’s important not to be scrawny, no other position has the opportunities like these guys do to leave your opponent eating your dust.

Speed kills and you should always remember that in your training. Work on short speed to get away from the defender as well as top-end speed to make sure they don’t catch you!

As said earlier, each player has general needs that must be met – these are crucial to developing yourself as a player. From there, looking at what you need to do individually is the next step.

Playing position is one of the key parts of this, both with working on your unique things, but also with putting things that you don’t really need to the wayside. Next week we’ll look at more things that you need to look at to make your training unique.

COMMENT BELOW – Let me know what YOU do to keep your training specific to your position!