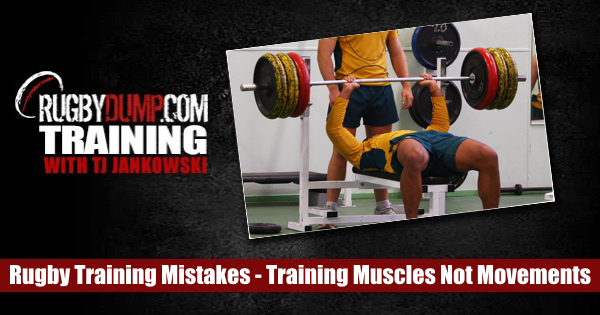 This week Rugbydump Academy S&C Coach TJ discusses the difference between training muscles and training movements, and the 11 movements that you need to do in the gym as a rugby player to get better.

So last week I discussed that perhaps we shouldn’t be training exactly like a bodybuilder. I had a little bit of backlash from guys (who probably train like bodybuilders) that said they had still had success from training that way.

Something I need to clarify here is that just because something works for one person, it does not mean it’s going to work for everyone. This is why I pointed out in the article “Not doing YOU” that every training plan needs to be individual.

Whilst this is the case, we still need to set some rules that each individual plan should adhere to. This week we’re going to look at the movements that need to be performed.

Bodybuilders look at each body part because when they step on stage in their undies, they will be judged on how good each body part looks. Now whilst rugby players will often have to evaluate body parts that they need to work on, either for performance or to avoid injury, it’s not the basis of how they perform in their sport.

A rugby player is judged by how they perform on the field. So rather than look at each body part and try to build/strengthen it, we need to look at each movement that you will be performing on a rugby pitch.

The human body has 11 different movement patterns that are used in combinations to make up all human movement.

Get better at each of these patterns and you’ll become a better rugby player, and human (although it’s arguable as to whether that’s up to me to judge).

Here’s a list of the movements, what they are and some examples of how to train each one.

When you straighten from the knee, mostly using the quads. Training examples are squat variations, lunges and step-ups. 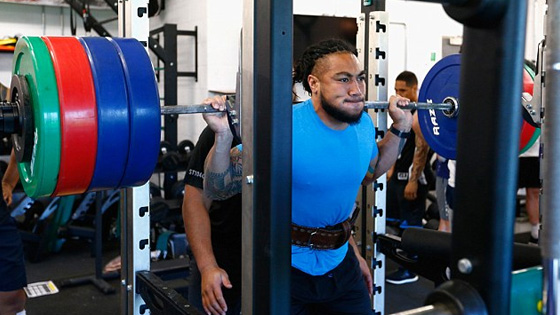 When you straighten at the hip with the knee in a fixed position, mostly using hamstrings and lower back. Training examples are deadlift variations, kettlebell swings and back extensions.

When you straighten the hip with a bent leg. Training examples include

When you push vertically with your shoulders, chest and/or triceps. Training examples include all overhead pressing and dip variations.

No prizes for this one, anything pressed horizontally using the chest and triceps. Training examples are any bench press variations and pushups. 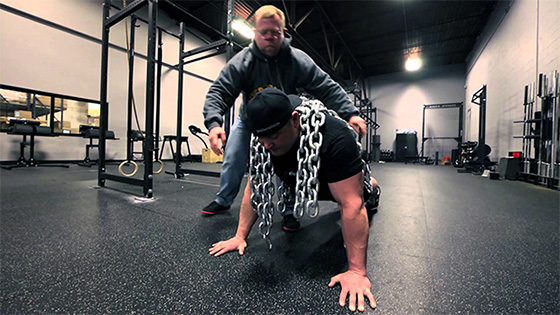 Using the back musculature and biceps to pull something down (or up). Training examples are pull up variations, pull down variations, high pulls and curls

Yep. Training examples are all the many different row variations, dumbbells, barbell rows.

When you bend forward at the torso (or fight to prevent that bend) using the core musculature. Training examples are sit up variations, planks, heavy (symmetrical) carries. 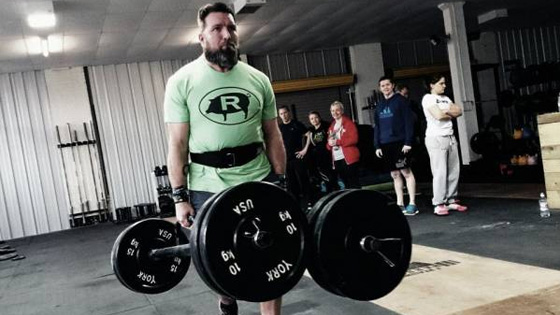 As above, but to the side of the body. Training examples here are single arm farmer’s walks and any uneven carries, windmills and side planks

Any twisting or fighting to prevent twisting of the torso using the core. Training examples include Russian twists, Turkish get ups, chop variations.

Remember that most of your movement, particularly on the pitch will be a combination of these, not just one in isolation. For example a scrummage for a prop would be part lower body push, part torso anti-rotation and flexion and some upper body pushing/pulling.

Putting It In A Plan

Now that we know the movements and how to train them, let’s establish how to create a plan.

Structuring your training week then becomes a simple case of fitting in some variation of each movement in your plan.

You’ll notice that this isn’t completely different from looking at body parts, with horizontal pushing movements mostly being traditional “chest day” movements. But it’s important to distinguish the difference in the way you are looking at things.

Ideally you would train each of these movements twice a week, potentially more in the off season, potentially less in-season. You can hit different variations of each movement in the same session if you wish, but it’s not overly necessary and may take up training time that could be spent on one of the 10 other movements that you need to get through in a week.

It’s a smart idea to perform in the order given, as the lower body work is much more taxing than the torso and upper body work, so would ideally be performed when you’re fresher, although this could change on the individual’s needs.

Another thing you need to be doing is addressing weaknesses. Figure out what you need to improve on in order to make you a better rugby player and do that more often.

It’s much easier to maintain something you’re already good at than it is to fix a weakness, that’s why you only need to do a few sets a week on the things you’re good at and much more on the stuff you’re not.

If you have a double bodyweight bench press but still cant seem to shake a tackler off in contact, you may need some extra torso work.

Finally, speaking of torso work… yea, basically you need to do it! These movements are probably the one thing that wouldn’t feature at all in a bodybuilder’s programme, but it’s very important in transfering gains made in the gym onto the pitch.

Short of getting a programme written for you (like you can on the Rugbydump Academy) this is the simplest and most efficient way of having an individual programme that will really increase your rugby performance. Just tick the boxes and get better.