Sam Vesty butchers try as Tom Varndell chases him down 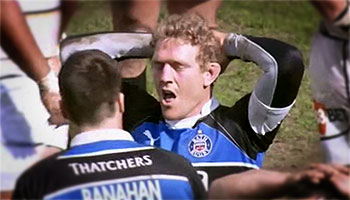 Sam Vesty was badly shown up on the weekend as his premature showboating may prove signicant to the outcome of the Aviva Premiership relegation battle, as well as Bath’s European ambitions. It brought back memories of Robbie Fleck, and others.

Bath won the game 17-12 but Vesty should have denied Wasps a losing bonus point, as well as picked up the four-try bonus point, which would have helped his side towards a Heineken Cup spot.

Instead he saluted the crowd with his blinkers on, unaware of Wasps speedster Tom Varndell rapidly approaching. The winger somehow pulled Vesty down, as well as brilliantly got underneath him, resulting in a held-up adjudication from the TMO.

“Sam’s been apologising ever since,” said Bath’s Sir Ian McGeechan.

The permutations of the result now read that Wasps will face Newcastle Falcons in the final round with a four-point cushion, needing just a win to be safe, while the Falcons will need to overcome a 24 point margin to avoid relegation. “It’s going to be one hell of a game,” added McGeechan.

It was a brilliant piece of play by Varndell, and a shocker from Vesty, but it’s not the first time we’ve seen such a thing happen.

Have a browse through the related posts below the video and you’ll find some absolute howlers, including the Kayser-Fleck incident, a nightmare moment in the NRL, and that infamous Juan Leguizamon celebration, which you know you want to watch again.