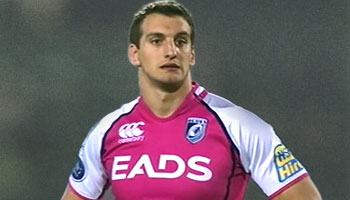 Sam Warburton made his return to rugby following a controversial red card and suspension he got from a tip tackle in the Rugby World Cup semi final. He made another big hit against Racing Metro in the Heineken Cup, but there were no cards to be seen.

Warburton was outstanding for Wales in the RWC, leading from the front and showing that while he’s still a youngster, he has the leadership abilities to go on to be a fantastic captain for many years to come. Unfortunately for Wales he was sent off by referee Alain Rolland in the semi final.

While the his home nation directed their anger at Rolland and the IRB, Warburton recently said that upon second viewing, it was actually uglier than he’d initially thought. Rolland himself has said that if he had the chance to do things over again, he would have made the exact same decision.

He was pleased to hear that the Welsh captain acknowledged that the correct decision was made.

“To be fair to Sam, I think it is a true measure of the man he is. I don’t think he had to come out to say anything and I didn’t really care one way or the other because what happened, happened,” added Rolland.

Against Racing Metro this past weekend Warburton put in another solid hit, this time on replacement Eddy Ben Arous. The hit was made as Arous jumped to catch the ball, so maybe some refs would penalise that but not on this occasion. It’s good to see Warburton back in action either way.