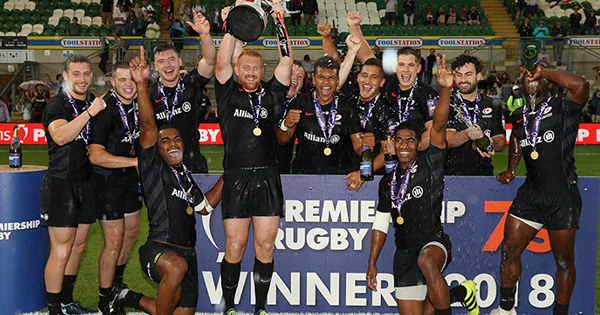 Saracens defeated Wasps 33-12 at Franklin’s Gardens to be crowned 2018 Premiership 7s champions, making this their second championship since 2010. After winning the trophy in 2016 and 2017, Wasps were denied in their quest to make it three championships in a row.

Saracens got two tries from captain Joel Conlon, the second of which put them up for good. Additional tries from Tom Griffiths, Rotimi Segun, and Miteli Vulikijapani ensured the Cup victory would accompany their 2017-2018 Premiership trophy.

“I think as the tournament went on, we clicked more and got there towareds the end,” Conlon said.

“It doesn’t seem to have been our strongest competition in the past, but we had a strong team out this year and everyone was really excited for it.”

With the newly-endorsed Gallagher Premiership getting cranked up in just a few weeks’ time, excitement is building for fans and players alike.

Wasps made it to the final after having defeated Newcastle Falcons, while Saracens defeated Harlequins in their semi-final matchup and look to have picked up right where they left off with their championship-winning ways.