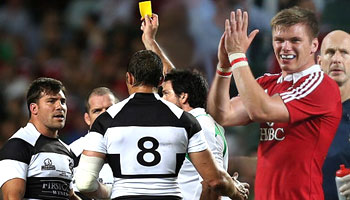 After being cited for his punch on Owen Farrell at the weekend, Schalk Brits was suspended for three weeks by an International Rugby Board disciplinary panel. Saracens teammate Farrell has played down the incident. Here is another look at it.

After lashing out at Farrell because he was holding him back, Brits was yellow carded by referee Steve Walsh, who hinted that it could have been worse if it weren’t for the occasion.

Brits will serve a three-week ban that will commence at the start of next season. Farell has said that he holds no grudge after being on the receiving end of the swinging arm punch.

“I was trying to hold him into a ruck, and he reacted to that,” said Farrell post match.

“Things happen in rugby. There’s no dramas there. It is a reminder of how vital it is to keep cool and not respond to provocation. I shook Schalk’s hand after the game, and he apologised when he came back on to the field.

“When someone reacts to you, you try not to take a backward step, not just in this occasion but in every occasion. I just grabbed him. There was nothing nasty in it.”

There has been a lot of talk about Farrell’s temperament and fiery edge, and while he has been criticised for reacting to Brits, others could say he did well not to retaliate further.

“Sometimes it is hard when someone lays a punch squarely on the side of your jaw not to react,” said coach Warren Gatland. “But we are going to emphasise from the start of this tour the importance of keeping our discipline.

“It is a nice reminder that sometimes things happen and you need to take one for the team. If you get whacked and respond, the consequences for the team can be severe. We might find a similar situation in Australia if someone is grabbed off the ball and we have to make sure we don’t react.”

Brits apologised publicly on Twitter too, saying “Lions played very well tonight. sorry for the over reaction brother @owen_faz, took it too far. hope you have a great tour. enjoy aus!”

The incident was included in the match highlights, but here it is again if you missed it.