Scotland the biggest risers in world rankings as they overtake Australia

It was a truly terrific weekend of international rugby, with some incredible shocks and some fascinating comebacks.

Last weeks heroes, Italy, found themselves ahead during the early stages of their match against South Africa, causing some to believe they may even bring down the world champions. The Springboks proved too tough a challenge in the end, as they beat the Azzurri comfortably 21-63. As a result of this thumping, Italy have found their rankings drop below Samoa, into 12th place.

Wales were a side building in confidence after beating an exciting Argentinian side last week, but this time around they were superbly dismantled by a ferocious Georgia. It was the first time Georgia had beaten Wales, and to do it at the Principality Stadium will have hurt the men in red. This shock result has hit the Welsh hard on the rankings, with a drop of 2 places down to 9th. Georgia on the other hand will be pleased to overtake Fiji as they now place themselves into 13th.

Scotland have had the biggest rise following the weekend’s results, as they launched themselves up to 6th place after a resounding victory over Argentina. This has seen Scotland leapfrog Argentina as they drop down to 7th.

England and New Zealand fought out a contest that needs no further examination, but their 5th and 3rd place spots remain intact.

Ireland fought hard for their 13-10 victory over Australia on Saturday evening, particularly with talismanic figure Jonny Sexton pulling out just 10 minutes prior to the game with an injury. Thanks to their ability to win the hard matches, Ireland remains in top spot on the world rankings, as Australia also hang on to their spot in 8th.

France are currently on a tremendous winning streak and sure showed why, as they dismantled Japan on Sunday. Both sides’ rankings remained the same following the match, however France are hot on Ireland’s trail. 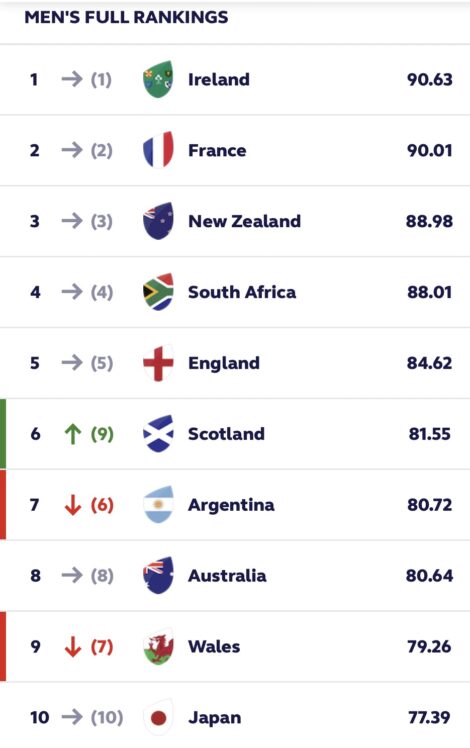 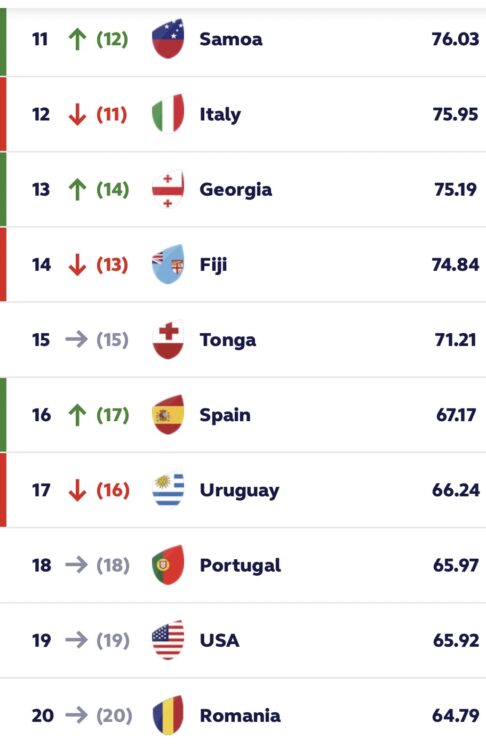