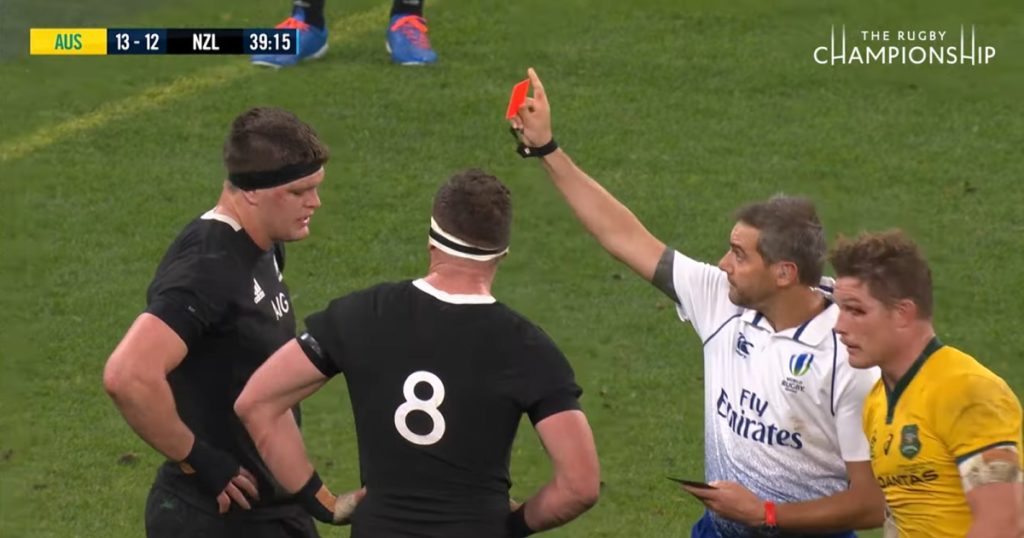 Australia recorded a first Bledisloe Cup victory over New Zealand since October 2017 with a convincing 47-26 win at the Optus Stadium in Perth, as All Black second-row Scott Barrett was sent off.

Referee Jérôme Garces gave Barrett his marching orders just 30 seconds before the half-time break after the second-row appeared to strike Wallaby captain Michael Hooper with his elbow at a breakdown.

Do you agree with the referee’s decision to send off Scott Barrett?#AUSvNZL #BledisloeCup pic.twitter.com/BrB0YGSS8E

Barrett’s sending off is just the fourth in All Blacks history, with the most recent coming two years ago when Sonny Bill Williams saw red against the British and Irish Lions.

Opinion on whether there was enough intent as deemed by referee Garces will continue to rage, but it did raise some tension among the Sky Sports presenting panel in the UK, with former England internationalist Will Greenwood pointing the finger directly at Garces.

“If that’s a red card, then there are so many more incidents like that that go unpunished,” he said.

“Every time you have Garces in charge, you know there is going to be a big call [in which] he hides behind the rule book.

“There’s contact to the head but that sort of stuff happens in the breakdown all the time. It’s different to the Sonny Bill incident because he was standing up and dipped the shoulder into the head at pace. No way was this a red card.”

Australia, leading at the time and showing their best performance of the Rugby Championship so far, went on to secure a comfortable victory which moves them to the top of the standings, with South Africa facing Argentina later on today.

The hosts began the game strongly and took an early 10-0 lead thanks to a Reece Hodge try and two kicks from Christian Lealiifano.

New Zealand responded and scored through Anton Leinert-Brown and Rico Ioane but Barrett’s dismissal turned the match back in the Wallabies’ favour.

Nic White, Lukhan Salakaia-Loto, Marika Koroibete and Kurtley Beale all touched down in the second half despite a fightback from the visitors, who scored via Beauden Barrett and Ngani Laumape.

The victory has more significance on the world stage as if Wales draw or win against England on Sunday, they will be handed the number one ranking for the first time in history. Should England win, Wales will be in second and England will go up to fourth, leap frogging South Africa.

As it stands(!!) Wales are the best rugby team in the world 👀.

Since the rankings have been introduced they have never sat in 1st. #AUSvNZL #ENGvWAL #RWC2019 pic.twitter.com/CgX9RCghxc

For Australia, it was the most points they have scored against New Zealand, beating the previous record of 35 in that famous encounter in 2000. The 21-point defeat was also the All Blacks’ joint-heaviest loss against Australia, equal with their 1999 match against the Wallabies.