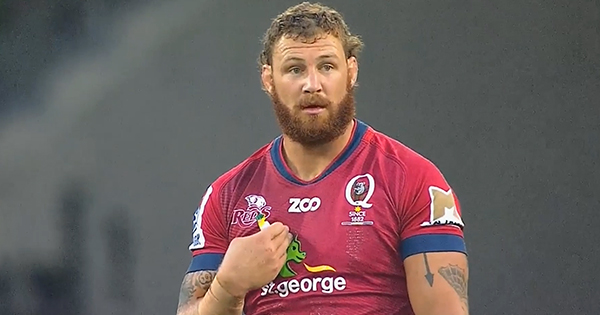 The Queensland Reds had a nightmare start to their Super Rugby campaign as they lost a man after just ten minutes, leading to a heavy 45-19 loss at the hands of the Melbourne Rebels. Scott Higginbotham had a match to forget after he made this tackle early on.

After consultation with the TMO, referee Brendon Pickerill summed things up and opted to send the Reds skipper off after his dangerous shoulder charge to the head of ball carrier Matt Phillip.

31-year-old Higginbotham argued that Phillip had been falling into the tackle, but the amount of force used and the lack of arms in the challenge meant that Pickerill was left with the choice between a lenient yellow or a sterner red, as per World Rugby directives on contact with the head.

“It was a violent incident, and they had a good look at it. You can’t go high,” said Fox Sports commentator Greg Martin at the break. “If he didn’t hit him in the head with a shoulder, he wouldn’t have got a red card.”

Shortly after that, the Reds were down to 13 men after second rower Lukhan Tui (see below) picked up and dumped former Reds halfback Will Genia into the turf. That might have looked like a more clear cut red card, but Pickerall opted for a yellow card only on that occasion.

With the Reds down on numbers for most of the match, they did well to lead at the break, but then Genia’s side took control and ended up scoring seven tries to three, for a comfortable opening round win.

UPDATE: Higginbotham has been suspended for 3 weeks. Tui will face his hearing on Tuesday.