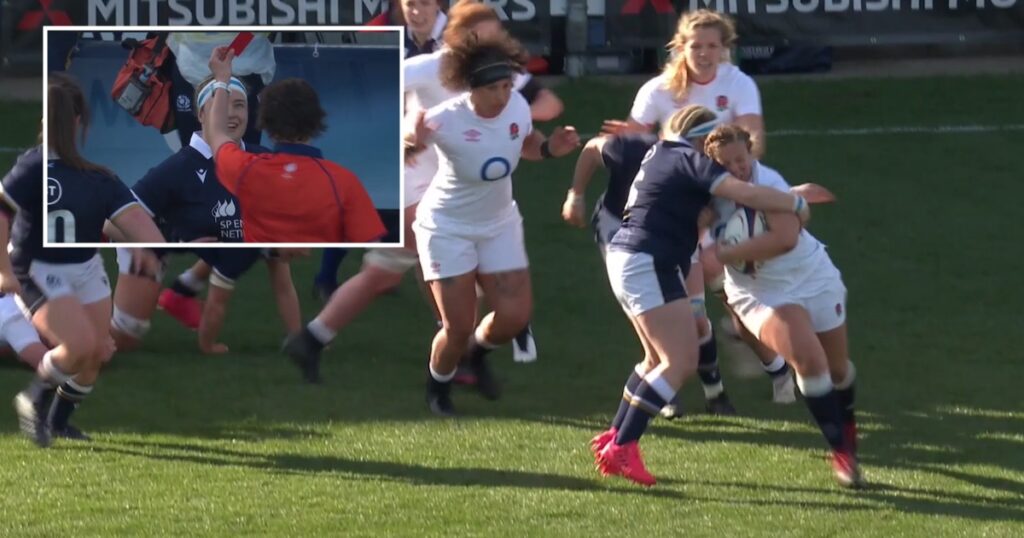 The first red card of the Women’s Six Nations was dished out last weekend, with Scotland prop Molly Wright receiving a three-week ban for her clumsy contact with the head against England.

Wright was dismissed deep in the second half after direct contact to the head of opposing prop Vickii Cornborough following an England line-out.

A virtual disciplinary hearing was held and the committee found that Wright’s actions had warranted a red cad, and handed out the suitable punishment, which rules her out of Scotland’s remaining Pool A match – under the revised 6 Nations format for 2021 – against Italy, as well as the final placing match.

A 6 Nations Disciplinary Committee statement read: “Ms Wright accepted that she had committed an act of foul play and that it had warranted a red card, and the Disciplinary Committee found the offence to warrant a mid-range entry point (six weeks), as the minimum entry point required under the World Rugby’s sanctioning framework for any offence that involves contact with the head.

The Disciplinary Committee identified no aggravating features. In terms of mitigation, the Disciplinary Committee gave credit for Ms Wright’s prompt acceptance that her actions had constituted foul play and been worthy of a red card, her exemplary disciplinary record, and her clear remorse, (shown by her attempts to make contact with the England No 1 post match to offer her apologies). The suspension was reduced by three weeks accordingly, so that the final period of suspension is three weeks.”

There’s no doubt that the incident was clumsy and somewhat avoidable, but the punishment falls in line with those seen in the men’s tournament for similar instances.

Scotland’s Finn Russell was banned for three meaningful matches for his contact to the neck area of France’s Brice Dulin (albeit with a fend), while Bundee Aki received a four-match suspension for his challenge on Billy Vunipola.

England kicked off their campaign for another 6 Nations title with a comfortable 52-10 victory in Doncaster.

You can see the red card at 10:15 minutes into the video below