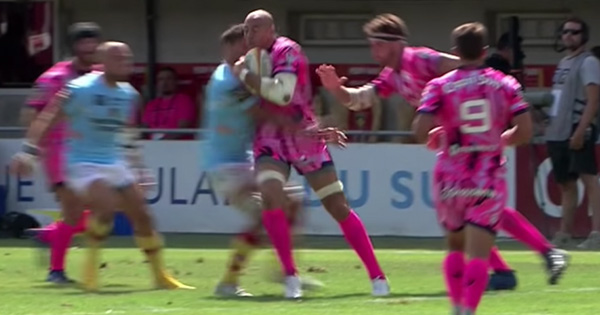 Talismanic number 8 Sergio Parisse suffered the unfortunate distinction of receiving a controversial red card in his opening Top 14 match of the 2018/2019 season. Despite being a man down, Stade Francais were easily able to handle recently-promoted Perpignan.

The incident occurred on the back of a restart, with Stade already holding a commanding 29-3 first half lead. Parisse had just enough time to collect the kick off and immediately brace for impact.

A split second later Perpignan flanker Alan Brazo came in for an upright tackle at full pace, running face-first into Parisse’s shoulder. What happened next left Parisse and most of the rugby world more than a little frustrated and bewildered.

Referee Laurent Cardona consulted with the TMO. After watching replay footage, he was happy to send the Italy great off with a straight red card, determining Parisse had led with the arm into the head of an opposing player.

Everyone from Stuart Barnes to former French captain Pascal Pape seem to agree the decision was “idiotic”, “ridiculous”, or “inadmissible”.

As for Parisse himself, he was slightly more judicious in his response: “I have the right not to have to agree but I respect the referee’s decision.”

Stade Francais won the match 46-15, placing them second on the table after round one.