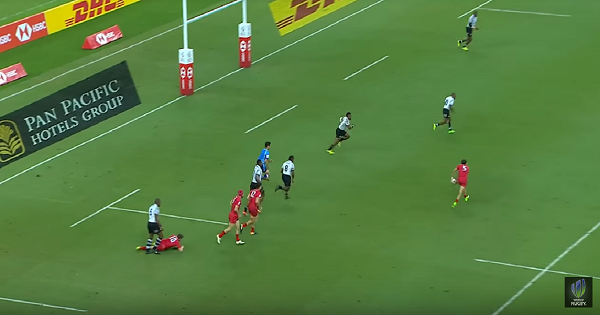 Fiji won their third consecutive tournament of the HSBC World Sevens Series, this time in Singapore after beating Australia 28-22 in the final. The win takes them above South Africa on the overall series standings.

As is the norm for a Sevens leg, there was some wonderful skills on show leading to some very wonderful tries coming from the likes of both finalists, New Zealand and Kenya.

Alasio Sovita Naduva’s wonderful break in the final was only eclipsed by one of the best superman finishes you will ever see, scored by John Porch.

Some patient play by Samoa led to Alamanda Motuga’s try, which was in stark contrast to Kenya’s Oscar Ouma Achieng who barrelled through Ollie Lindsay-Hague before offloading to Willie Ambaka.

Dylan Longbottom and Sergei Ianiushkin are both in contention for offload of the tournament, while Ben Pinkelman put the icing on the cake of a nice USA try.