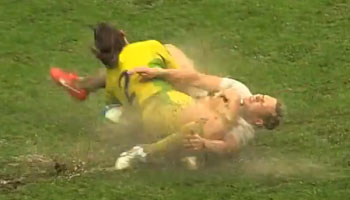 Here’s a clip from the Rugby World Cup Sevens in Moscow that we’ve been meaning to post and add to the archive for a while. So rather late than never, if you haven’t seen this collision yet, it’s well worth watching but not for the faint hearted.

While a lot of male fans may have preconceived ideas about Women’s Rugby in general, there’s no doubt that the commitment levels displayed at the highest level are quite incredible.

The game is growing rapidly and after a successful first ever IRB Sevens World Series, and the recent RWC Sevens, we’re sure to see more and more girls picking up the odd shaped ball and having a crack at this wonderful sport. With the simplicity of Sevens, it’s in a good place.

At the World Cup we saw an example of the aforementioned commitment in the plate final, as Australian Women’s star Sharni Williams showed that despite being the fairer species, there was nothing lacking in terms of physicality.

In wet and miserable conditions she’d just been treated for a bad knock to the nose, which needed to be ‘plugged’ after bleeding a lot, but managed to play on. From the restart, you guessed it, she threw herself at a loose ball, and collected the knee of England’s Heather Fisher, right in the face.

It was horrible to watch as unbelievably, Williams’ knee actually smashed into Fisher’s face too, stunning both girls. Tough as nails Williams played on though, as did Fisher, and the Australian was later rewarded with a try for her efforts, as well as the Plate victory.