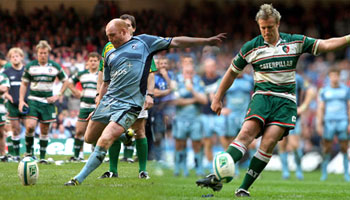 In one of the most amazing finishes to a game of rugby youre ever likely to see, Leicester Tigers progressed to the Final of the Heineken Cup after a dramatic Penalty Shootout against the Cardiff Blues.

The match itself was a classic, with the Millennium Stadium once again being the stage for this incredible piece of theatre that played out in front of a crowd that sat on the edge of their seats throughout.

The Tigers led 26-12 at one stage after tries from Scott Hamilton and Geordan Murphy, and four penalties from Julien Dupuy. The game was theirs, and it looked as though Cardiff had no way back.

The game shifted radically though when Craig Newby and Murphy were handed yellow cards as they defended desperately. Cardiff took advantage and Jamie Roberts and Tom James both scored sensational tries, levelling matters at 26-26.

Extra time commenced, and neither side could score after the two ten minute halves, leading to a rare occurrence the rugby penalty shootout.

Kicked from the 22 meter line, directly in front of posts, each side would have 5 attempts before it goes to sudden death.

We’ve got the full shootout for you, so sit back and enjoy all the drama as it unfolds.