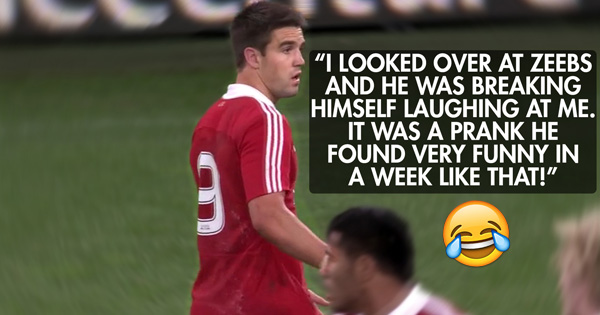 Conor Murray has had an interesting few days. Yesterday he was picked for the British & Irish Lions tour, and today is his 28th birthday. He is currently injured though, so could be in doubt. Recently he told this funny story about some of the banter on the previous Lions tour, where on one occassion his mate Simon Zebo stitched him up in a midweek match.

Murray was named in Warren Gatland’s 41-man squad yesterday, and if he is able to get over a niggling injury, he will be on the plane to New Zealand to face the All Blacks.

There will also be a gruelling midweek match schedule, the likes of which Murray knows all about after he played in some crucial games in Australia in 2013. On one such occasion, he did something that no doubt must have had the coaches scratching their heads.

“There is always a lot of banter flying around on Tour, excitement levels are high and there are always some big characters who love to make everyone laugh,” Murray explained.

“Towards the end of the 2013 Tour we were playing Melbourne Rebels in a pretty big game. It was the week before the second Test and everyone was working hard to perform well.

“Everyone knew that we all had a shot at getting into that Test match squad and I felt it was going pretty well for me in the first half. I think I had scored a try and I was trying to play as well as I could. I remember being at the bottom of a ruck, there can’t have been more than couple of minutes to go before half time.

“Play rolled on and the lads set up another ruck as I was getting back on to my feet, it was at that point I heard my good friend Simon Zebo roar at me from the back field… ‘That’s half time, that’s half time, just kick it out’.

“I trusted him as you would trust a good friend and I just ran over to the ruck and picked the ball up, I kicked it almost backwards, just kicked it over the touchline and presumed it was half time. I started jogging off into the dressing room…

“It wasn’t half time apparently as the ref blew his whistle and said “line out, line out there”. I looked over at Zeebs and he was breaking himself laughing at me. It was a prank, he found very funny in a week like that, in a game like that. I’ll never forget it!”

We’ve put together a short video of the incident below, and as you can see, Murray’s recollection of the incident is just about spot on. For those of you that remember it, now we know why he kicked it out prematurely. The look on his face was priceless.

Warren Gatland will be hoping a player of Murray’s experience will be on tour, but things are looking a bit shaky after he injured himself in the Six Nations and hasn’t quite recovered.

“He’s got a nerve issue. I spoke to the doctor yesterday. He was hoping to be fit this week. He had a setback a couple of weeks ago,” said Gatland when asked about it by the media.

“He’s going to need to play before he gets on the plane. That’s going to be important for us. I would be reluctant to take someone to New Zealand with a neck injury who hasn’t played. His last game was against Wales.”

“He’s incredibly fit. It’s causing him a bit of discomfort and a bit of weakness in his arm, and hopefully he’s going to be right in a couple of weeks – the neurologist is confident he’s going to be okay. He’s had some disc problems in the past, but that’s not what’s causing the issue. It’s some nerve problem that he’s got.

“Look, it’s a concern, because he is a quality player. He’s disappointed himself. Hopefully he’s going to be right in a couple of weeks and get one or two games under his belt.”